A Historic Company From Finland 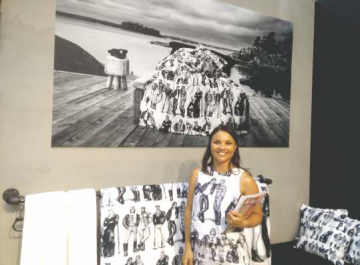 In 1839 the factory building’s structure was radically new with its six stories, and soon after the construction was finished, the first machine-woven fabrics were produced. As was the practice at the time, the company took care of its employees. First some homes for workers and a school were built in the mill area, followed by a hospital, library as well as a church, and a sickness fund was set up. The workers started their own cooperative store in 1900. Finlayson was a “city within a city”.

The mill had plenty of work to offer and there were plenty of job-seekers too. Finlayson was soon the biggest industrial enterprise in the Nordic countries, and it employed a large portion of Tampere’s population. The hard work paid off and Finlayson received numerous awards for its high-quality products.
Plevna, the largest weaving room in the Nordic countries was completed. In 1882, history was made in the room when the first ever electric lights in the whole Nordic region were switched on, greatly reducing the risk of fires, which happened quite frequently at all factories at that time. Oil lamps and candles were not suitable to be used beside cotton, which is highly flammable.

Finlayson & Co. expanded its range of products to include printed fabrics and oilcloth after acquiring its competitor, Forssan puuvillatehdas. The company was now called Oy-Finlayson-Forssa Ab. Designs for printed fabrics were still bought from abroad. A studio was later founded at the Forssa mill, where designers with art training were hired. Many classic designs were created here.

Finlayson merged with Porin Puuvilla Oy in 1973. In 2004 Finlayson was acquired by CapMan Espe Group Oy and continued its operations as a subsidiary called Finlayson Oy. In June 2014 Finlayson Oy was purchased by Jukka Kurttila, Petri Pesonen and Risto Voutilainen from funds managed by the capital management company CapMan. As part of the transaction, the operations were sold to Trading House Eesti, which is part of Europe’s leading bed linen manufacturer Trading House Scandinavia AB.

High quality and Finnish excellence in design are Finlayson’s strengths. Finlayson products are designed in Finland without ever compromising on the highest quality. The products are durable, functional and look fantastic.