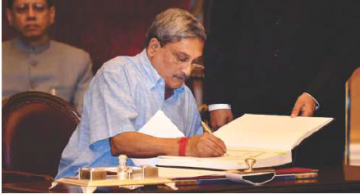 The government is open to reviewing all cases of blacklisted defence firms on merit and has partially lifted a ban on Tatra trucks as it prepares a new policy that will allow foreign defence firms to legally hire agents, Defence Minister Manohar Parrikar.

The new Defence Procurement Policy (DPP), that will lay thrust on development of domestic defence industry and faster acquisition process, will be issued in another month and a half.

Asked about the new government’s policy on blacklisted firms, Parrikar said, the “debarment principle” is also being worked out and pointed out the basic principle is in the interest of the armed forces.

“So if I have to deal with a firm which does have some earlier colour on it, it will based on merit,” Parrikar said in an interaction with journalists.

He added that based on merit and necessity, the government can “consider after proper verification, lifting the ban or restriction to a reasonable level”.

Explaining the process, he said the state-run BEML has been allowed to supply spare parts for the Tatra trucks as long as it does not deal with the British subsidiary of the company, which was banned by the UPA following a scandal.

“We have lifted the restricted ban for technical and purchases of spares from the original company provided they have nothing to do with the people who have been blacklisted,” he said.

Parrikar pointed out that one should not just go by the name Tatra as there are 3-4 companies which make the trucks. “The company which has been banned is Tatra UK and we have permitted BEML to deal with the original company which is owned by different people now,” he said, adding the condition is that they should not have relations with “questionable individuals”.

“A restricted Non Objection Certificate has been granted to BEML, because we do need for defence purpose Tatra vehicles. It has become critical for certain applications,” he said.

Heavy vehicle maker Tatra was banned in March 2012 after the then Army Chief General (retd) V K Singh’s allegations that he was offered bribe to clear “sub-standard trucks” supplied by the company to the Indian Army.

Parrikar said that a draft of the changed policy is ready and a final draft will be ready in another 8-10 days. It will then go through further procedures before going to the Union Cabinet.

“The process shall be completed in another one and a half months,” he said.

Defence Ministry sources said a blanket ban on defence firms has proved to be detrimental to the interests of the armed forces as it cripples the procurement process.

“The thinking is that there cannot be a blanket ban on defence firms. Measured steps can be taken and the policy will outline what steps would be taken for various offences, if committed,” the sources said.

Under UPA Defence Minister A K Antony, a number of companies were blacklisted due to alleged cases of corruption. The last major one was that of Italian defence giant Finmeccanica in a Rs 3,600 crore deal on VVIP helicopters.