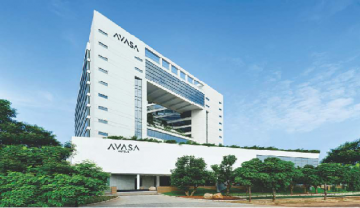 As you drive towards Hi tech city, Hyderabad looking at block after block of built FAR, there is a break from the concrete boxes of commercial and apartment buildings. You see the 9 floor frame with stepped terrace gardens : ‘Avasa’. Design Challenge The irregular shaped site was the biggest design challenge. The site is wide towards the front road and narrows down towards the back. The building follows the site, forming the letter ‘A’, in plan. Concept: One of the aims of the design was to respect the given site.

Thus, the design of the hotel responds to its context with a highly site-specific scheme. Due to limited open space on site and in the vicinity, a continuous green space has been conceived in the form of stepped terraces. These terraces are visually connected from the third level to the top floor. Thus, the rooms are arranged along the two arms of the ‘A’ and the connecting slab between the two arms acts as terrace space which step back as one proceeds to the higher levels. Section The building sections were the most important diagrams in the design process.

The final section, through the terraces explains the buildings spatial qualities best. Vertical transport through this stepped section is achieved through 3 separate banks of lifts. One set in the west wing commutes between Basements and Ground floor. One set in the East wing commute between Ground and 11th level. The bank of lifts off the central lobby axis operate through all the levels. Atriums: The Atrium could have been a single large volume from Ground to 11th level. However it has been split into two – The Lobby atrium at the ground level, connecting the Grand lobby and the Banquet Halls. The central atrium at the third level which has been created under the stepped terraces. 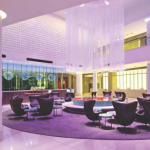 This has been done in order to mitigate noise and also to maintain a sense of scale. There are two bridges between two room blocks, one on the fifth floor which is the business club : “BRIDGE”, and the other is the double-level Sky-Bar connecting the room blocks on the tenth and eleventh level. The Sky- bar has its own set of lifts Layout. The nine room floors sit on a podium containing the arrival porte-cochere, the reception lobby, a speciality restaurant and all-day dining. The first level contains the banqueting facilities including the Grand Ballroom which is connected directly to the ground level porte-cochere by a grand staircase. The second level is the service floor over the banquet corridors.

The third level has the first room floor with spa and gym. The central atrium space opens out to the pool deck and terrace function space with alfresco bar. The stepped terraces at each higher floor have been given a different character. Thus, the room corridors on each floor have a unique experience, where guests experience the naturally lit corridors and the lush cascading gardens.