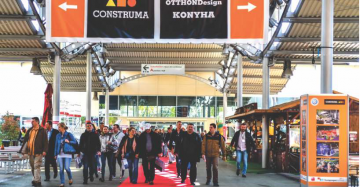 Exhibitors and visitors alike were satisfied upon the closure of the 36th Construma on Sunday. The greatest home making and construction industry assortment of exhibitions of the Central Eastern European region attracted even more visitors than last year, with nearly 60 thousand guests attending the exhibition at the Hungexpo Budapest Fair Center. The first construction industry job fair was highly successful, which was Hungexpo’s way of reacting to one of the greatest problems of the industry.

This year’s drive had a great effect on not only the construction industry, but also the greatest domestic professional exhibition of the construction industry. Far more exhibitors attended Construma than ever before with nearly 700 exhibitors from 20 countries, most of whom already indicated that they would be returning next year. After last year’s record attendance, there was an additional nearly 10 percent increase in visitor numbers, which clearly shows the growing interest in construction.

Minister of State for Parliamentary and Taxation Affairs András Tállai of the Ministry for National Economy (NGM) explained at the opening ceremony that the construction industry is experiencing a particular drive, and it is promising that based on an annual comparison, the volume of new contracts increased by 212 percent. He added that this was accompanied by a significant increase in the number of flat constructions, with nearly 10 thousand new flats built in the past one year. They expect to witness a significant increase of flat construction in this year and the following years: the number of occupied newly built flats will be around 15-20 thousand in 2017 and 20-25 thousand in 2018.
The significance of Construma is clearly demonstrated by the fact that this isn’t the first time the government made important construction and energy industry-related announcements for the upcoming period at the event. Minister of State for Development and Climate Policy and Priority Public Utility Services Zsolt Szabó of the Ministry for National Development (NFM) announced the new round of the Otthon melege (Warmth of Home) program at the Öko City event hosted as part of the Hungarotherm exhibition. The HUF 3.5 billion frame amount announcement allows for the renovation of furnaces and chimneys with tenders accepted from June of this year.

One of the most popular features of the exhibition was this year’s innovation, the JÖV? OTTHONA (Home of the Future) project. The designers of the National Association of Interior Designers interactively demonstrated through the interior spaces they created how a smart home can be cost-effective, comfortable and highly trendy. A unique feature of the “smart house” on display was that they directed the devices with various controls located throughout the rooms with the use of a single device, a tablet, including shadowing technology, illumination, heating and air conditioning as well as water treatment and security technology devices.

This year, CONSTRUMA’s partner country was India. The continent-sized country occupied two pavilions with ….. exhibitors across more than 300 square meters. Alongside India, Austria, Czechia, China and Taiwan presented the latest products and innovations from the various countries at their shared, collective stand.