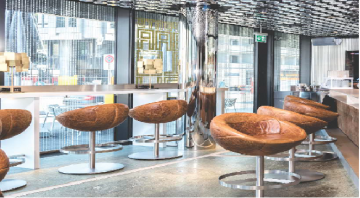 FIFA is creating the FIFA World Football Museum to celebrate the rich heritage of football and to show how the game continues to connect and inspire the world. It also tells the story of how the world football’s governing body has developed association football globally and made it the undisputed number one sport in the world.

The museum collects, exhibits and preserves significant artefacts, documents and photographs of international football and its governing body. The existing collection has over 1000 exhibits including memorabilia, texts, and pictures from the FIFA archives.
Pride of place in the FIFA World Football Museum is the FIFA World Cup Gallery. A must-see for all fans, the gallery is dedicated to the history of football’s ultimate prize and host an incredible collection in a stunning architectural setting where the jewel of the exhibition – the FIFA World Cup Trophy – is on display.

FIFA looked for a suitable building to host the museum for several years. In 2013 FIFA signed a 40 year lease with Swiss life to rent the Haus Zur Enge building on Tessinerplatz in the centre of Zurich. The renovation of the building and the construction of the museum began on 25th April, 2013 and were completed on 18th December, 2015.

Originally an office building, Haus Zur Enge was designed by the well-known Zurich architect Werner Stucheli between 1974 and 1978. When plans to convert it into the Fifa World Football museum were approved, architects from the SAM Architekten und partner AG studio stripped it back to its shell and rebuilt it, extending it upwards. Through the new structure of the facade, the building was adapted to the landscape and the style of both the city and the surrounding area. Today, the museum has three floors of exhibition space. There also are a street-level sports bar, a bistro, a cafe, a museum shop and conference rooms on the second floor. There are apartments and offices on the third to seventh floors, and penthouse apartments on the eighth and ninth floors.

sustainability was an important guideline for the renovation and reconstruction of the building, the interior fittings and the facade. The newest energy saving technologies were implemented, for example, a water pipe connects the building to the lake of Zurich and the lake water is used as an energy source to heat the building in winter and cool it in summer.
The wooden floorings in the museum had to meet the highest requirements concerning the choice of material, the installation methods and the tight schedule of the works.

Mapei Suisse SA, the Group’s Swiss subsidiary helped the owner and the contractors by providing continuous technical assistance both in the design phase and on the construction site. The company proposed the use of quick-setting products with very low emission of volatile organic compounds, which helped to meet the schedule of renovation.