Local Architecture is Coming back 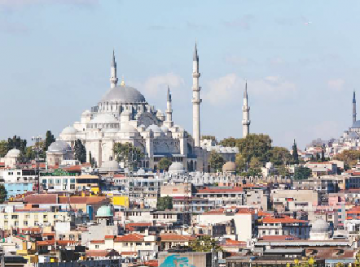 The fast and haphazard housing due to modernization, immigration and fast increase in population harmed the architectural texture of the cities, which resulted in fewer structures belonging to traditional architecture. The first counter-attack was from the district of Süleymaniye in Istanbul. This historical district started to reclaim its historical façade by restoring its old buildings. A few districts on the Asian side such as Safranbolu took their place among the ones that preserved their architectural identity.

Although this was limited to small-scale projects or even single structures in various cities, including Istanbul, we started to see houses and other structures that bear the traces of the past. Another news was from the Housing Development Administration of Turkey. With its new concept application, which reflects the local architectural traces of the Anatolian landscape on the housing projects, the organization pioneered the period of having a different design for every city. The key element of this concept will be “horizontal architecture”.

Aiming to create a perception of civilization and local reflections while building new cities, the project will gain its strength from the understanding of aesthetics that even the closes landscapes in Anatolia may differ in architectural texture. The first council house project by TOK?, which aims to put this richness to good use and add variety to architectural approaches with the inspiration from the local texture, with the traces of the local architecture was realized in Ürgüp, Nev?ehir, known for its fair chimneys, hot springs, valleys and mountains. But there’s more; the project will live on in residences that carry the traces of the local texture in Mardin, Bursa, ?znik and many other cities.

Only the local residents of cities will tell whether this is a trend or a search for identity in architecture, but it seems that the soul looks for its body.

10 Reasons to Visit Graz
Austria’s second largest city Graz effortlessly blends classical epochs with bold modernity. Here are ten reasons why to visit Graz.
1. The bright blue, bulbous Kunsthaus – Graz’s architectural answer to the Centre Pompidou – was built in 2003 to commemorate the city’s appointment as European Capital of Culture. Nicknamed ‘the friendly alien’, the museum sits on the banks of the River Mur and contains art of the past four decades.
2. The 13th century, pale yellow Uhrturm is undoubtedly the city’s most cherished symbol, perched high on the Schlossberg, or ‘Castle Hill’. To get there, you can meander up a path through pretty gardens, take a glass lift from the mountain tunnel, or jump on the red funicular railway.
3. The Landeszeughaus is the world’s largest historical armory and contains approximately 32,000 items of weaponry, suits of armor and tools dating from the late 15th to the early 19th century. The volume of pieces, organised neatly into gleaming rows within beautiful wooden rooms, will astonish even those without a passion for arms.
4. The stately Schloss Eggenberg is the stuff of fairy tales – a vast baroque palace built for a wealthy aristocratic dynasty. Construction began on the palace in 1625 and was designed with astronomical symbolism in mind, such as the 365 windows in honor of the new Gregorian calendar. After a guided tour of the staterooms, stroll through the extensive gardens where peacocks roam freely.
5. Since it opened in 2011, the Joanneums Viertel has become the cultural core of Graz. The complex of fine historical buildings – the Neue Galerie, Natural History Museum and Styrian State Library – are connected by an underground visitor center. Buy a 24- or 48-hour ticket to visit several museums.
6. A young fashion designer from Graz, Lena Hoschek honed her craft with an internship at Vivienne Westwood in London before returning to her hometown to open her own studio in 2005. Inspired by Hollywood pin-ups of the 1940s and 1950s, Hoschek now sells her dresses globally and has designed tour clothing for the flamboyant Katy Perry.
7. Located on the top floor of the iconic 1913 Kastner und Öhler department store, Freiblick is a stylish coffee lounge and restaurant that has 360-degree views of Graz’s picturesque, red-roofed old town. With all-day breakfast and daily specials on the menu, locals come here to eat and socialize on the roof terrace. Tourists come to stand on the steel-and-glass platform that juts out over the city street below.
8. Graz relies on fresh produce from its many local farmers; in fact, the city has the most market days in all of Europe per year. At the Lendplatz, you will find a huge variety of foods: from farmhouse breads, sausages and ham, to fruit, vegetables and the regional delicacy of pumpkin seed oil.
9. The 54m steel Light Sword (a sculpture representing the protection of human rights) stands outside of the grand neo-baroque Opera House, and is a perfect example of how conservatism jostles alongside the avant-garde in Graz. The Opera House, the second largest in Austria, showcases opera, musical theatre and ballet in a grand setting at very reasonable prices.
10. Irresistible, hearty cuisine is one of Graz’s greatest assets; expect classic dishes to be ubiquitous, such as goulasch, Wiener schnitzel, boiled beef and delicious apricot-filled pancakes called palatschinken. Der Steirer specializes in seasonal Styrian and Austrian specialties and was awarded ‘1 hat’ by the influential restaurant guide Gault et Millau in 2015.