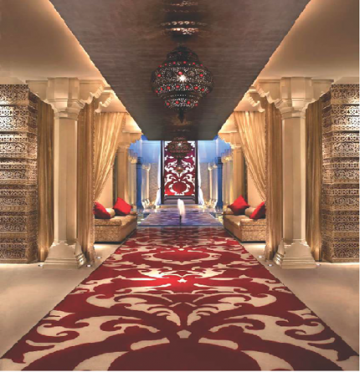 it may be said that every living soul hankers for a glimpse of paradise. The Mughals in particular sought ‘Jannat’ or Paradise by ensuring perfection and balance in all facets of their lifestyle.  ITC Mughal’s Kaya Kalp – The Royal Spa, is where rejuvenation comes through an experience of unmatched luxury and total well-being.

Kaya Kalp – An ultimate experience
In Agra, the city of the Taj Mahal, Mughal magnificence has found a new meaning.’Khwab Mahal’ – the Palace of Dreams – at ITC Mughal, Agra  is a tribute to India’s most romantic of monuments the enchanting Taj Mahal, situated just minutes from the hotel and built by Emperor Shah Jahan as a memorial to his beloved wife Mumtaz. Highlights of the new wing include the five Presidential Suites each spread across 2091sqft and featuring luxurious indoor and outdoor living areas, marble bathrooms, grand four poster beds and spectacular interiors that capture the spirit of the Mughal dynasty with a contemporary twist.

An additional three Presidential Family Suites named Nusrat Begum, Zeenat and Farzana, each feature an extra twin bedroom to offer a truly private residence.
The Khwab Mahal wing also features the 364sqft Mughal Chambers, offering contemporary style with touches of the exotic Mughal era, as well as the 727sqft Royal Mughal Suites, providing additional space for relaxation.A private lobby entrance to the grand Khwab Mahal ensures guests arrive in style, whilst all have easy access to the multi-award-winning Kaya Kalp – The Royal Spa, spread across 99,000 sqft and acclaimed as one of India’s leading spas with its opulent design and treatments based on the pomegranate fruit,  brought to India by Babar, the first Mughal Emperor.

Kaya Kalp – the Royal Spa, located at ITC -The Mughal, is now nearing completion and finishing touches are being added to a living experience of Mughal luxury, reflective of the Imperial Dynasty whose opulence and glory held the world in awe.. Stretching across an area covering more than 99,000 square feet, at the spa guests will have the opportunity of experiencing traditional therapies in regal surroundings.  The spa has been designed to bring together elements of Mughal architecture and lifestyle, with meaningful experiences for the soul.

In designing ‘Kaya Kalp – The Royal Spa’, architect and landscape designer, Pradeep Sachdeva has achieved a close synthesis between indoor and outer spaces highlighting many influences of Mughal landscaping and architecture. The Mughal concept of ‘paradise’ is seen in the extensive use of running water, fountains, outdoor rain water showers, courts full of greenery open to the skies and interiors embellished with stone latticework, mother of pearl, inlay and mirror work. A visit to the spa may be considered a journey through a world of regal luxury and pampering
This magnificent oasis of tranquility, follows Mughal tradition in its extensive use of greenery and water, both important elements in gardens laid out by the Mughal Dynasty. Nestled amid 35 acres of luxurious gardens and inspired by the spirit and style of the Mughal Dynasty, ITC Mughal was the winner of the first Aga Khan award for Architectural Excellence in Asia and is to date the only Indian hotel to have been awarded this prestigious recognition.

From a sunrise champagne breakfast at the roof-top Jharoka-e-Taj overlooking the Taj Mahal to a private dinner for two in the hotel gardens, ITC Mughal is an idyllic base for a visit to India’s most romantic city.