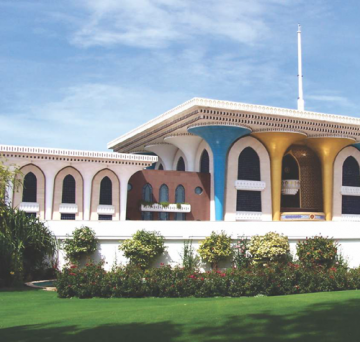 From its spellbinding sandstone buildings to its deep blue waters and red sand dunes, Muscat the capital of Oman, is waiting to be discovered by adventurous travelers.
Walking along the waterfront restaurants and cafes along the Corniche, one feels as if in a Mediterranean coastal town, except for the ubiquitous youths sporting the white dishdasha. There Not a trace of sand on the streets, sidewalks or gleaming cars. Oman has been named the cleanest city in the world after Singapore.
Holiday makers who come here seeking sun and sea also enjoy the unexpected pleasure of comfort and serenity in this ancient land. It is an amazing country ruled by a sultan, a country whose shores form rock formations like the Norwegian fjords.
A way in which the Omanis differ from the other peoples of the Arabian peninsula is that they have distinguished themselves as seamen. Throughout their history they have fought numerous sea battles. Legend has it that intrepid sailor of fable, Sindbad, lived on a small dhow in the old Omani town of Sohar some 200 KMs form Muscat.

Al Alam, the palace of the sultanate in the white and sand colored area known as Old Muscat, was built in 1972. The palace was erected smack dab in the middle of the Al Jalali and Al Mirani castles, which were built in the 16th century during the Portuguese occupation and reflect Portuguese architecture. Visitors are not allowed inside it. The gold and turquoise colored entrance is characteristic in shape but due to its relatively small size the palace as a whole exudes a horny air far from the usual opulence associated with such structures.
Muscat has become a destination on the radar of the international five-star hotel chains that have opened here in the last ten years. Thanks to these brands, which attract their own followers, the city hosts a large number of tourists especially from France, England and Switzerland. These tourism initiatives are one of the key reasons why the United Nations in 2010 named Oman the country that exhibited the most development in forty years.
Numerous companies organize desert day safaris to Wahiba Sands, 240 kms from Muscat by car. Here, red sand covers an area 180 kms long and 80 kms wide where you can still see native Bedouin of the Nizari tribe. There houses are called barastiand are made of mud and palm leaves.
Most of the natives you encounter in Oman exhibit the wisdom of peoples who for centuries sailed the open sea to new horizons. Perhaps this is what lies behind the country’s rapid development.