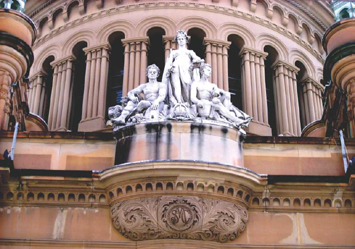 Queen Victoria Building
The Queen Victoria Building (or QVB), is a late nineteenth-century building designed by the architect George McRae in the central business district of Sydney, Australia. The Romanesque Revival building was constructed between 1893 and 1898 and is 30 m (98 ft) wide by 190 m (620 ft) long. The building fills a city block bounded by George, Market, York and Druitt Streets. Designed as a shopping centre, it was later used for a variety of other purposes until its restoration and return to its original use in the late twentieth century.

Interior
Stained glass windows, including a cartwheel window depicting the arms of the City of Sydney, allow light into the central area, and the roof itself incorporates arched skylights running lengthways north and south from the central dome. The intricate colonnades, arches, balustrades and cupolas were built in the Victorian style.
The building consists of four main shopping floors. The top three levels have large openings (protected by decorative cast-iron railings) that allow natural light from the ceiling to illuminate the lower floors. Much of the tilework, especially under the central dome, is original, and the remainder is in keeping with the original style. Underground arcades lead south to Town Hall railway station and north to the Myer building.

Architecture
Although the entire site was originally designed by George McRae during 1893-98, the Victorian Romanesque style conveys the influences of a well-known American architect named Henry Hobson Richardson in Australian society during this era. Richardson has been highly recognised for designing public libraries, commuter train station buildings, single-family residences, and commercial buildings like the Queen Victoria Building. The use of columns, arches, and the prodigal amount of details has been manifested by Richardsonian Romanesque and these are also the same minutiae executed by George McRae in designing the Queen Victoria Building.

The interior with the Great Australian Clock
The figure of Queen Victoria, wearing her coronation regalia and the Royal Clock.

The dominant feature of the building is the central dome which consists of an interior glass dome and a copper-sheathed exterior, topped by a domed cupola. Smaller domes of various sizes are on the rooftop, including ones on each upper corner of the rectangular building.

Exterior features
At the southern end of the building is the Bicentennial Plaza, facing the Sydney Town Hall across Druitt Stree. Another statue of Queen Victoria can be found here, arrayed on a light grey stone plinth, the work of lrish sculptor John Hughes. This statue stood outside the legislative assembly of the Republic of lreland-Dalil Eireann in Leinster House, Dublin – untill 1947, when it was put into storage and was given to the people of Sydney by the Government of the Republic of lreland in the 1980s. It was placed on its present site in 1987.[9]
Nearby stands a wishing well featuring a bronze sculpture of Queen Victoria’s favourite dog ” lslay”, which was sculpted by local Sydney artist justin robson. A recorded message voiced by john Laws urges onlookers to give a donation and make a wish. The tens of thousands of dollars cast into this well annually benefit deaf and blind children.