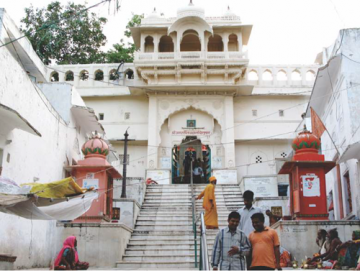 But there are not many temples of Lord Brahma. There is one at Pushkar, near Ajmer in Rajasthan which is only one of its kind in the whole world and is the most prominent one.

It is said that Brahma performed a yojna to expiate the curse he was subjected to by Savitri who fell offended by him. At the completion of the yojna, the great sage Vishwamitra established this temple. The puranas have description of this temple. This confirms the antiquity of this shrine of Lord Brahma. This temple is unique as it is a rare temple.

Lord shankaracharya renovated this temple. Afterwards, in 1401 AD, Maharaja Jawat Raj of Ratlam made more additions and repaired the old temple but the main temple over the centuries has retained its original form. Marble flooring was required from time to time, the shikhar (pinnacle) is 700 feet high. Like the architecture of Somnath temple, here also stone slabs and blocks were joined together with smoothen lead.

With the idol of Lord Brahma, there is also enshrined the idol of Gayatri. Besides, other idols of gods and goddesses are there. Brahma represents the supreme spirit manifested as the active creator of the universe.He is said to be of red colour and has four heads.Originally he had five but one was burnt by shiva.

The temple is set on a high plinth and is approached through a number of marble steps leading to an entrance gate archway, decorated with pillared canopies  (as below). The entry from the gate leads to a pillared outdoor hall (Mandapa) and then sanctum sanctorum (Garbhagriha). The red shikhar (spire) of the temple and ahamsa (Awan) – the mount of Brahma-are distinct features of the temple. The hamsa motif decorates the main entry gate. Marble floor in black and white checks and walls inside the temple have been inlaid with hundreds of silver coins by
devotees (with their names imsenbed) as a mark of offering to Lord Brahma. There is a silver turtle facing the Garbhagriha.

Brahma’s central icon made of marble was deified in the Garbhagriha in 718 AD by Adi Shankaracharya. The icon depicts Brahma seated in a crossed leg position in the aspect of creation of the universe. The central image is of life size with four hands, four faces, each oriented in a cardinal direction. The four arms hold akshamala (rosany), perstaka (book), kurka (Kusha grass) and kamandalu (water pot). Brahma is riding on his mount, hamsa. Gayatries image sits along with brahma’s in centre to his left. Savitri sits to the right of Brahma along with other deities of the Hindu pantheon.