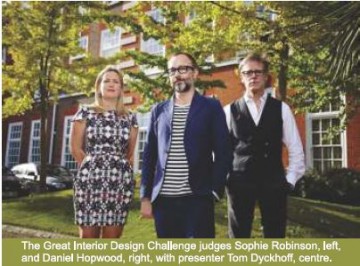 The second series of The Great Interior Design Challenge has started on BBC Two. While the three contestants might have satisfied their clients, they failed with this viewerIf you were to play a drinking game during The Great Interior Design Challenge where you drank every time you heard the words ‘upcycled’ ‘shabby chic’, ‘distressed’ or ‘industrial’ you would not make it to 8pm with your vision intact.

The second series of BBC2’s The Great Interior Design Challenge – which runs throughout this week – comes little more than nine months since the first series aired, and despite that gestation period nothing has changed from the original.

Just to give a quick recap of the shows format; three amateur interior designs each decorate a room to a brief by a client and the winner goes through to the next round.

They are given a £1,000 budget and an upcycled (drink!) project to help the judges – Daniel Hopwood, award-winning architect and interior designer, and Sophie Robinson, ex-editor of BBC Good Homes and interior stylist – decide who goes through.

The Great Interior Design Challenge is a short, sharp burst of home design and will be on BBC Two for less than a month. It is a cousin of The Great British Sewing Bee and The Big Allotment Challenge, and an offspring of the behemoth that is The British Bake Off.And after the first episode the standard of competitors will need to rapidly improve if this show is to keep us watching for the entire series.

The three competitors were tasked with redesigning the living room of three adjacent 17 century Cotswold cottages, all owned by members of the same family.But each failed to produce an original or dazzling concept. Not that we want to see purple rooms and tears in the style Laurence Llewelyn Bowen and Changing Rooms, but it would have been nice to be shown quirky new techniques or original ideas to renovate furniture.

Oil-rig draughtsman Scott checked himself out of the running with his overuse of the same fabric, some sloppy work and basically all-round fretting. He was, somewhat, let down by one of his team provided by the show who used dark paint for wood to lighten an interior wall that started his meltdown. But it was his use of lights more suited to a modern nightclub than a cosy cottage that should have sealed his fate.

While 28-year-old mum of four Francesca played it so safe it was hard to stay awake. And it was her use of shabby chic towards the end of this episode that would’ve likely finished you off.

Her design was described as “a dream come true” by the client, but she failed to come up with anything original or even try anything innovative.

It seemed that college lecturer Fiona had assessed the level of her competitors and barely broke into a sweat as she walked into the next round. She happily played around with designs and made cushions in the garden, and wandered over to try and talk to a stressed Scott. Perhaps she is like Nadal or Federer, toying with the other competitors in the early stages, saving herself for the bigger hitters later. Or maybe she was just the best of a bad bunch.

Either way, if the next trio of competitors do not improve on these three I will certainly be distressed.