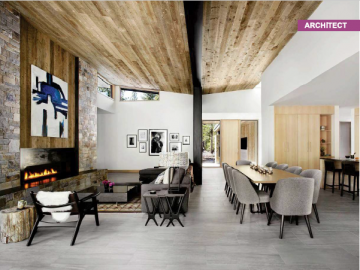 Prefab homes save time reduce waste and have been revered as the holy grail of design, so when are they going to become mainstream ?
Architects, environmentalists and some forward-thinking builders embrace prefab construction — whose products run the gamut from affordable manufactured homes to sleek tiny houses with ultra-modern finishes to contemporary mansions — as the way every home should be built in the future, but despite having been around for decades, prefab or modular homes made up just 2 percent of new single-family houses in 2016, according to the U.S. Census Bureau.

Prefab construction gained traction in the 1970s when builders and architects recognized they could save on build time and labor costs by moving the majority of the building process into a factory. Initially, modular homes were fairly basic and boxy, but over time architects, builders and factory owners have improved their methods, and nearly anything that can be built on a homesite can now be assembled first in a factory.

While prefab houses can cost less than a traditionally built home, the financial savings are not always the most compelling reason for people to choose this construction method. Building the house in a factory limits weather delays and makes the delivery date more predictable. Change orders are usually not allowed, which also speeds construction. Fewer hours on-site translates into some saving on labor costs.

The “cool” factor has also helped fuel interest. Modern style architecture is commonly associated with modular construction simply because the clean lines and flat surfaces can be shrink-wrapped and stacked on a truck more easily than the parts of a Victorian-style home.

But as long as the architect understands the guidelines of the engineering that takes place in the factory, there is really no limit to what you can build with modular construction. You can do any style you want from traditional to Craftsman to Colonial to Tudor or contemporary. Prefab lends itself a little more to contemporary homes because of the clean lines, but you are not limited to that style.

Prefab housing is more common in other countries, particularly Sweden, Japan and Germany. The difference is that they tend to be production based, so the homes all look alike, even if they are high-end prefab homes.

Today, modular parts can even be constructed by robots in some factories, which addresses the current shortage of construction labor. Parts are put together on the site in a few weeks rather than months. Prefab construction is the best kept secret in America.

The process of designing and building a prefab home requires similar steps to a traditionally built home finding the lot, designing the home and getting permits. The difference is that builders need to contract with a factory to construct the house and transport it to the site, where the builder will then provide the finishing work and landscaping. Custom-home buyers can work with a design-build firm, hire their own architect or work with an in-house architect at a modular home factory.

Whether it’s to save time, to reduce construction waste, to execute a cool design or to be able to say your home was built with robots, prefab is likely to maintain its fans. But even they admit it may be years before prefab becomes the most popular way to build a home—if it ever does.