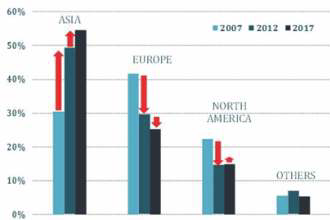 The 16th edition of CSIL World Furniture Outlook Seminar took place on April 18th 2018 at Salone del Mobile, international furniture fair in Milan. This meeting represents a unique chance for furniture players to be updated on the sector current trends and on its future perspectives.

The traditional format of the seminar saw one hour and half focused discussion with a panel of eight qualified speakers from different countries providing market insights to an audience of over 100 furniture manufacturers, suppliers and sector related companies and institutions.

The seminar was chaired by Giovanna Castellina, CSIL international marketing director. After her opening remark, the seminar activity started with the speech of Alessandra Tracogna, CSIL senior partner, providing the sector outlook and introducing the key issues affecting the context. The message delivered to the audience was that furniture production is growing at a global level, with some countries and areas growing faster than others and being more competitive on the international markets.

According to CSIL figures presented, world furniture production amounted to over 400 US$ billion last year, up 3% on the previous year and cumulatively growing by 25% in the last decade (in current US$).

World furniture production. Current US$ billion and annual percentage changes
Source: CSIL
As highlighted by Alessandra Tracogna, Asia Pacific stands out in a global comparison, with over half of world production taking place in the region (China gets the lion’s share with over 70% of the regional production).

Recently, the speed of Asian production growth decelerated. The regional context is registering increasing competition within the area and on export markets (Vietnam is growing faster than China) and the industry is facing some common challenges in furniture production affecting the producers’ competitive advantages. Two Asian speakers provided additional insights.

Linda Tu, Vice Secretary General of CNFA – China National Furniture Association and Vice Chairman and Secretary General of CAFA – Council of Asia Furniture Associations, after providing figures on the Chinese furniture industry, illustrated the main pillars of the Made in China 2025 strategy which is aimed at building a platform for innovation in manufacturing with a focus on themes like: smart manufacturing and green approach. She also reported on the main issues the Chinese furniture industry is facing. Among them: competition from other Asian suppliers, increasing production and logistic costs and technical barriers, as the enhancement on environmental requirements, on export markets. It was mentioned that the national association is working on reinforcing cooperation with partners worldwide both by boosting an extreme powerful fair system in China and by carrying out several bilateral initiatives abroad.

Within Asia, Vietnam is also an important player. According to CSIL data, it is the 5th largest furniture exporter in the world and a fast growing producer in Asia (the Vietnamese speed of production growth is higher than the Chinese one). As reported by Nguyen Quoc Khan, Chairman of the Vietnamese Handicraft and Wood Industry Association, the furniture industry can count on a positive macro context and an increasing inflow of Foreign Direct Investments as well as on some sector specific comparative advantages including wood availability and competitive labour. Vietnam signed the Voluntary Partnership Agreement (VPA)/FLEGT in May 2017 and the National Assembly promulgated the revised Forest Law in November 2017, creating a fundamental change in legal timber awareness. Mr Nguyen Quoc Khan closed his speech stating that Vietnam is confident in producing wooden furniture for the world from legal timber.

Europe is a leading player in the furniture industry, being the second largest producing region in the world. According to CSIL estimates presented at the seminar, the region accounts for around one quarter of the total sector output (it was around 40% a decade ago).

As illustrated by Roberta Dessì, Secretary General of EFIC- European Furniture Industries Confederation – the European Union furniture sector employs over 1 million persons in almost 200,000 companies, mainly SMEs. The furniture market which was hardly hit by the crisis is now in a process of recovery, although facing some main challenges like: competition within the area and market fragmentation, import pressure, durable employment, rising raw material costs and innovation protection. EFIC identified several priority areas for intervention including: the EU harmonization process, the development of smart environmental and safety regulation, an efficient IPR protection, financial access for innovation and product development and improved information to consumers.

Alexander Oswald HDH-VDM, National Confederation of German Woodworking and Furniture Industries, provided an insight on the current situation in Germany, which is the largest European market. The country is the first manufacturer and exporter in the European Union (followed by Italy and Poland). Even if loosing sector companies and employees in the last decade, the sector turnover exceeds the pre-crisis level. Stagnation on the domestic market was reported due to several factors including: an aging population, high concentration in furniture retail and declining construction activity. Import penetration was reported to be on the rise, with trade balance remaining negative. The forecasts are for an increase in export higher than that of production for the domestic market.

Poland is one of the fast growing furniture producers in Europe. As explained by Patrycja Niemczyk-Favaro’, from the Milan Bureau of the Polish Investment and Trade Agency on behalf of Tomasz Wiktorski from the Polish Fund for Development, several indicators set the path of sector growth: new dwellings and consumer confidence are at record level on the domestic market and unemployment is at historically lowest level. Investment in furniture production are increasing and the Polish Furniture Flagship Program that was briefly presented is aimed at supporting the sector growth along some main drivers: to boost production optimization and automatization (to be more competitive), to favor consolidation and M&A (to overcome the limits of small size of companies), to increase innovation in design, functionality and materials (to create value added).

A focus on the European market was also provided by Mauro Spinelli, CSIL senior partner, who outlined the opportunities arising in the contract market, quantifying this sector and highlighting the main market trends. The production of contract furniture and furnishings in Europe was worth around EUR 10 billion in 2017, whereas consumption amounted to about EUR 7.7 billion according to the latest brand research issued by CSIL. Hospitality, office, real estate, marine and restaurants were the fastest growing segments and performed above the European average. Retail and Education increased at a slower rate.

North America emerged in CSIL world picture for its recent positive performance. Furniture production has been increasing in the last five-year period which was the object of CSIL analysis (growing faster than in Europe). The U.S. was the driving force of the area, driven by the positive performance of the U.S. market. Local sources seem to be optimistic for the coming years, even if issues related to trade policy of the US administration constitute an important element of uncertainty weighting on the scenario.

As stated in the release sent on the occasion of the seminar by Jerry Epperson, MAE, Mann, Armistead & Epperson, USA “the U.S. economy is gaining momentum, with almost all the main variables on a positive trend. Expectations are that 2018 will see retail sales of furniture and mattresses continuously growing, even at higher rates than in 2017”.

Another element confirming the positive and healthy status of the U.S. furniture sector came from Randy Fiser – CEO at ASID, American Society of Interior Designers, which provided an insight on the United States focusing on the interior design industry. His presentation focused on this industry, generating a turnover of around US$10 billion last year and set to growth, according to estimates, year after year up to 2019 in all the main sub-segments: office, hospitality, retail, education and healthcare. Still, some concerns were expressed on the negative impact on the U.S. economy of a ‘possible trade war’.

The global perspective, as emerging from CSIL forecasts presented to the audience, is positive for the coming years with the furniture market growing at a 3% yearly rate (in real terms) up to 2020. Fastest growing regions are Asia Pacific, followed by North America, the Middle East and Africa.

Furniture and furniture components are increasingly traded on a world scale. Presently, international trade is worth around US$ 140 billion according to CSIL estimates and is set to grow in the coming years up to 2020. This is an important engine for sector growth. The main drivers are: the presence of international value chains, the global sourcing strategy operated by leading retailers and manufacturers and the increasing import penetration in several markets. On the other side, the uncertainty of trade policies and the presence of tariffs and technical barriers are seen as the main obstacles.

World trade of furniture. Current US$ billion and year on year percentage changes
Source: CSIL
The seminar concluded with a final remark by Giovanna Castellina, who recapped the global dimension of the furniture sector, as a playing field where sector strategies should be aimed at facing the arising challenges and supporting companies in strengthening their competitive advantages.