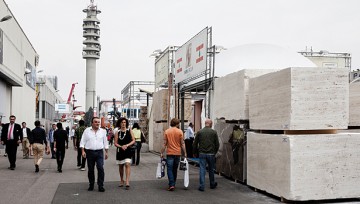 Justified its Role for the Development of Italian Natural Stone System

MARMOMAC returned to the Verona Exhibition Centre to give a scintillating performance again. It was to promote the excellence of Italian manufacturing products abroad and inform the world about the design, culture and innovation related to the country’s natural stone industry.

Verona is home to MARMOMACC, the leading event for the promotion of “Made in Italy” natural stone and products thereof, on the global market. This 48th edition of the event presented every sector of the stone industry: from unprocessed to finished stones, machinery and accessories through to innovative design solution. This edition had an increasingly international focus on business confirming the central role of stone culture.

Establishing once again its standing as world’s leading trade fair, the 48th edition of MARMOMACC attracted more than 1,400 exhibitors from nearly 60 countries with new entries from Singapore, Slovenia and Ireland. There were 16 groups organised by the government as well as national agencies, with a return of Palestine and the debut of Tunisia. There were also present official trade delegations from 44 countries and buyers and specialist operators from about 30 countries. Twelve halls alongside all external areas in the show grounds remained occupied with exhibits.

According to Ettore Riello, President of VeronaFiere, MARMOMACC has been playing an important role in the growth of Italian exports. He said “The natural stone field saw Italian exports grow in 2012 by almost 10 per cent amounting to more than 1.7 billion euros. This positive trend also continued in the first half of this year, which closed at +7.3 per cent amounting to 896 million euros. This is why an international exhibition such as MARMOMACC is fundamental for the development of foreign business for our companies, which are perceived all around the world as for their a non-relocatable excellence.”

In MARMOMACC 2013, along with traditional markets likeUS, Canada and UK for finished stone products, target countries which remained under focus were Russia, Central America, China and South East Asia. As regards machinery and technology, on the other hand, the Gulf Region, North Africa, Central America, Russia and Iran were under spotlight.

One of the reasons for the success of MARMOMACC 2013 lies in the decision to combine business with Design and product culture thereby also turning the event into one of the most important occasions for Comparison, innovation and training for companies and professionals working with stone. Since design is Acknowledged as a universal added value for Italian production, MARMOMAC 2013 consequently decided to focus on this subject. One of the exhibition halls at MARMOMACC 2013 was dedicated to culture-inside MARMOMACC with an impressive programme of conferences, workshops, exhibitions, and installations exploring the creative use of natural stone.

Numerous other initiatives like Marmomacc & Design and its Fluid Stone product had about 30 designers in communicating the expressive potential of marble through modern media tools, while Bathing in Light was an exhibition presenting Turkish stone set against water and light.

The other features such as the International stone Architecture Award, Marble Forum, the Best Communicator Award, Marmomacc Lab and Marmomacc & City were the major highlights of MARMOMACC 2013.

The International Award Architecture in Stone is a biennial event held to celebrate the best rchitectural projects involving the use of stone materials.

The other award, “Best Communicator Award”, the 7the edition in a row, was also announced during MARMOMACC 2013. Conceived as a way to highlight the importance of exhibition spaces as an effective means of communication for natural stone, this award was open to all exhibitors attending the fair.

MARMOMACC 2013 truly justified its reputation as the greatest showcase in its class and the best meeting place for exhibitors and buyers. It successfully qualified its role for the development of the Italian natural stone system.