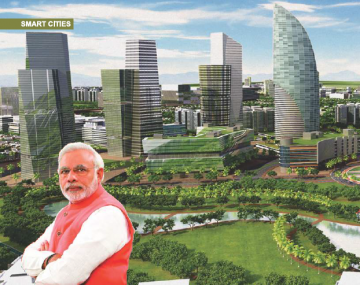 Prime Minister Narendra Modi’s vision to build 100 smart cities by 2020 is a step in the right direction. Smart cities will provide a safer and healthier environment, better facilities and connectivity and overall an enhanced lifestyle for the people of the country.

India is rapidly developing and envisaged to be a super power by 2025. The country which was once driven by an agrarian economy is rapidly being fuelled by its urban engines. There is a definite flow of the population moving from rural to urban India and it is estimated that more than 40 per cent of India’s population will live in cities by 2030.

Technology is the basis on which these smart cities operate. Smart cities are based on six key areas of functionality; technology, citizen participation, governance and efficient management of resources. Technology plays a major role in making cities smarter and thus attracting more investments and improved lifestyle for the people.

Presently, our cities are over populated and haphazardly built and therefore it would make better sense to develop new smart cities rather than trying to modify existing cities into smart ones. The government can look at developing these smart cities along Delhi – Mumbai industrial corridor and other such industrial corridors across the country.

There is a growing trend of new age living being technology enabled and driven. Our lifestyle and everyday living totally depends upon technology in every sphere of our lives and this is in line with way smart cities are being developed. It will improve the lives of its citisens in terms of better connectivity, improved living conditions, healthier and cleaner environment and an enhanced lifestyle for the people.

Today, the Indian government has taken steps of moving into e-solutions in its administrative departments by employing various tools like e filing and e governance for various departments. IT enabled solutions are improving the working by way of optimizing given resources.

Improvements can be found in the optimization of given resources, reduction of costs based on infrastructure sharing; reduction of bills for individual use; increasing economies of scale and encouraging overall best practices.

In order for the smart city concept to become successful it will be important for the public and private sector to come together in a market efficient structure which is incentive based with less bureaucratic red tapism and major reforms in existing infrastructure policies. There has to be a well-integrated public-private structure that runs through the entire development value chain to realize specific results.

Finally, it has to be said that for smart cities to take off successfully there are a number of issues that would need to be addressed. The most important among them being financing options available for developing these smart cities. Also, there is a lack of clarity in land titles and ownership, archaic laws that vary from state to state, inadequate human capital and technology to operate these cities and a benchmark to demonstrate return on investment are some issues that will have to be addressed subsequent to attracting investment.