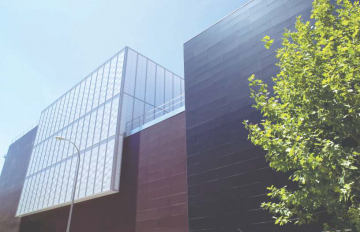 The “Tiepolo” apartment complex is located in Mestre near Venice, Italy and was built at the beginning of the 1970’s. It is a particularly large complex and is made up of two main blocks that come together to form an “L” shape and has 32 housing units with access via 4 sets of stairs.

The façades was covered with klinker tiles which, after around 40 years, had started to show their age. Because of the poor condition of the tiles and the risk of falling tiles, it was decided to remove them and give a new look to the building.

The work, which was carried out not only of façades but also on the terraces, was followed by technicians from the Mapei Technical Services Department, who carried out a study on the treatment required for the substrate of the façades and on the bonding materials. A study was also conducted by the ceramic tiles manufacturing Casalgrande Padana for the new ceramic tiles.

The two companies, along with the administrator of the complex, the architect Silvia Bortolozzo, carried out a survey of various layers of the substrate and a series of pull-off tests to measure new resistance.

To check the condition of the render on which tiles had been bonded in the 1970’s, a total of five pull-off tests were carried out, mainly to check if the existing render was strong enough to hold the new ceramic tiles.
After removing the old ceramic tiles, all the damaged parts of the render were cleaned with high pressure water jets to eliminate all traces of dirt, dust, grease, oil, old paint, etc.

The surfaces were then treated with MALECH water-based acrylic undercoat and bonding promoter, diluted 1:1 with water.

The primed surface was smoothed with NIVOPLAN and PLANICRETE synthetic latex rubber at a rate of 2 kg for every 25 kg of NIVOPLAN.

At the contact points between the various substrates and around the openings for the windows, a 2 mm galvanized wire mesh was embedded in the render to prevent the formation of cracks.

Bioactive ceramics by Casalgrande Padana were chosen for the façades that would not be thermally insulated. The tile joints were grouted with ULTRACOLOR PLUS anti-efflorescence, quick-setting and drying mortar with water-repellent Drop Effect and mould-resistant Bio Block technology. The expansion joints were sealed with MAPESIL LM neutral silicone mould-resistant sealant with Bio Block technology for movements up to 25%.

The end walls of the building were covered with the MAPETHERM thermal insulation system and with MAPETHERM AR1 GG adhesive used to bond the insulating panels.

Apart from installing new ceramic tiles on the façades, some of the terraces were also repaired. After removing the existing screed a new one was made using TOPCEM PRONTO, before waterproofing the surfaces with MAPELASTIC and MAPEBAND. The ceramic tiles were bonded with KERAFLEX MAXI S1 in its grey shade and joints were grouted with KERACOLOR GG. The joints between the walls and floor of the terraces were sealed with MAPESIL LM.