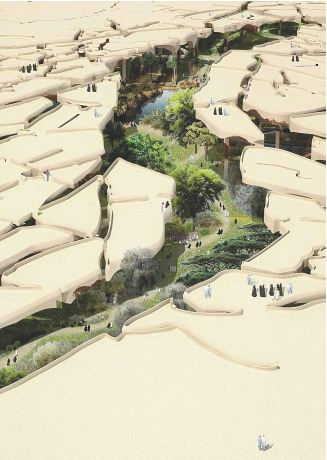 WHAT happens when one of the richest countries in the world sits in the middle of a desert? They go underground.

The urban planners of Abu Dhabi asked London design studio, Heatherwick, to create a park that would provide some relief for its residents from the oppressing heat and as a place to wind down.

Spread over 1.3 million square feet, Al Fayah Park will look like a 65 foot high mound of earth from the outside. Using the natural landscape as inspiration, Heatherwick studied the surrounding desert to come up with their one of a kind design.

The roof of the park is fashioned from the patterns in the desert formed when the hot sun cracks the earth. These series of cracked pieces will then be raised on columns to form a dome under which plants can grow away from the searing desert sun.

The 20 metre high shaded garden will feature cafes, play spaces, a library, pools, streams and community vegetable gardens. And at night the elevated plates will become meeting areas when the temperatures drop. Looks pretty cool to us.