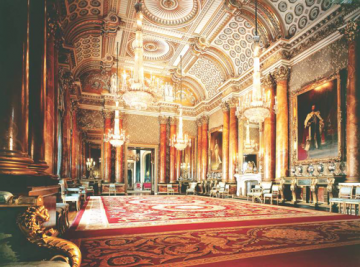 George ||| bought Buckingham House in 1761 for his wife Queen Charlotte to use as a comfortable family home close to St james’s Palace, Where many court functions were held. Buckingham House became known as the Queen’s House, and 14 of George |||’s 15 children were born there.

In 1762 work began on remodelling the house to the king’s requirements, to designs by Sir William Chambers, at a cost of E73,000.

George 4, on his accession in 1820, decided to reconstruct the house into a pied-a-terre, using it for the same purpose as his father George |||.

As work progressed, and as late as the end of 1826, the king had a change of heart. With the assistance of his architect, John Nash, he set about transforming the house into a palace. Parliament agreed to a budget of E450,000 as a more realistic figure.
Nash retained the main block but doubled its size by adding a new suite of rooms on the garden side facing west. Faced with mellow Bath stone, the external style reflected the French neo-classical influence favoured by George 4.

The remodelled rooms are the State and semi – State and semi – State Rooms, which remain virtually unchanged since Nash’s time. Many of the pieces of furniture and works of are in these rooms were bought or made for Carlton House (George 4’s London base when he was Prince of Wales), which was demolished in 1827.

The north and south wings of Buckingham House were demolished and rebuilt on a larger scale with a triumphal arch-the Marble Arch – as the centrepiece of an enlarged courtyard, to commemorate the British victories at Trafalgar and Waterloo.

By 1829 the costs had escalated to nearly half a million ponds. Nash’s extravagance cost him his job, and on the death of George 4 in 1830, his younger brother William 4 took on Edward Blore to finish the work.

The King never moved into the Palace. Indeed, when the Houses of Parliament were destroyed by fire in 1834, the king offered the Palace as a new home for Parliament, but the offer was declined.

Queen Victoria was the first sovereign to take up residence in July 1837, just three weeks after her accession, and in June 1838 she was the first british sovereign to leave from Buckingham Palace for a Coronation. Her marriage to Prince Albert in 1840 soon showed up the Palace’s shortcomings.

A serious problem for the newly married couple was the absence of any nurseries and too few bedrooms for visitors. The only solution was to move the Marble Arch – it now stands at the north-east corner of Hyde Park – and build a fourth wing, thereby creating a quadrangle. Blore, the architect in charge, created the East Front and,thanks largely to his builder, Thomas Cubitt, the costs were reduced from E150000 to e106,000. The cost of the new wing was largely covered by the sale of George 4’s Royal Pavilion at Brighton.