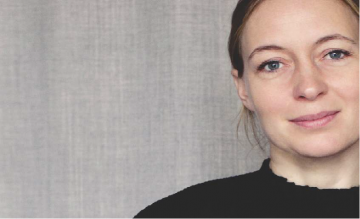 Her first project, entitled The Ladder – a ladder that doubles as a chair –, was quickly picked up for production by Nils Holger Moormann, after the German designer spotted the prototype in an >> interior design magazine. The other project that jumpstarted her career was the Caravaggio lamp (2005, with Lightyears). Not only a bestseller but also a longseller! Heeding the call to experiment, Cecilie Manz has worked on such diverse projects as sofa throws, a minibar for a Wallpaper* show, a series of wooden armchairs, a collection of dining tables and chairs for Fritz Hansen, glass vases, and several models of portable speakers for B&O Play – the more affordable brand recently launched by fellow Danes Bang & Olufsen, she has been collaborating with since 2014.
Despite her taste for experimenting with new materials and exploring original functions, whenever she sits down at her drawing table the process is invariable. Every new design starts with countless sketches and models and a close dialogue and collaboration with the manufacturer. A visit to the production line may refine the result and match the techniques used in each particular factory. This autumn, Cecilie often flew out to Japan, firstly to collaborate with a Japanese company called Actus on a project named Moku and also to be the cocurator of the exhibition “Everyday Life – Signs Of Awareness” at the 21st Century Museum of Contemporary Art Kanazawa on the occasion of the 150th anniversary of the relationship between Japan and Danemark.