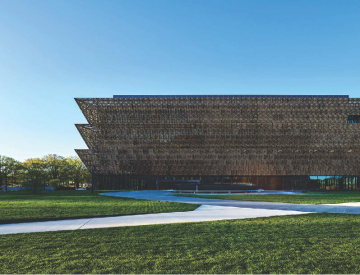 LOUIS I. KAHN MEMORIAL AWARD
Ghanian British architect Sir David Adjaye has been awarded the 2018 Louis I. Kahn Memorial Award by the Center for Architecture and Design in Philadelphia.
The annual award recognizes individuals who have made significant contributions to the field of architecture. Established in 1983, the annual Louis I. Kahn Memorial Award + Talk is celebrated as Philadelphia’s signature event, while also celebrating the achievements of Philadelphia-based architect Louis Kahn.
Awardees’ projects are also featured in an exhibition at the Center for Architecture and Design each year in late spring through early summer.
Adjaye, recognised as a rising star architect of his generation, was praised for “his ingenious use of materials, and sculptural ability”, reflecting on his sensibility and vision. Celebrating the 33rd edition of the Louis I. Kahn Memorial Award + Talk series this year, at the event, the architect will deliver a keynote discussing his work, his process, and will offer insights into his vision for designing inspirational architectural spaces. The award ceremony and talk will be held on May 3, 2018 at Irvine Auditorium, in Philadelphia.
“As a young student of architecture, I was in admiration of Louis Khan’s mastery over light and his seemingly intrinsic understanding of materiality. To now receive an award in his namesake is an incredible honor and a true milestone in my career,” said David Adjaye, regarding the 2018 Louis I. Kahn Memorial Award.
Sir Adjaye, 51, is the principal and founder of Adjaye Associates. He was born in Tanzania to Ghanaian parents. Adjaye is best known for his largest project, the $540 million Smithsonian Institute National Museum of African American History and Culture, opened on the National Mall in Washington, DC in fall of 2016.
His other projects include the Moscow School of Management in Skolkovo in 2010, the Sugar Hill mixed-use social housing scheme in Harlem, New York in 2015, the Aishti Foundation retail and art complex in Beirut in 2015, and two neighbourhood libraries in Washington DC in 2012.
Adjaye’s prominent ongoing projects include a new home for the Studio Museum in Harlem, New York, a major neighbourhood masterplan in San Francisco, One Berkeley, a £600 million redevelopment project in London’s prestigious Piccadilly area, and the firm’s first skyscraper in New York. The firm also unveiled plans for a new National Cathedral in Adjaye’s home country Ghana – the National Cathedral of Ghana will be built in Accra, the capital of Ghana.
In 2017, he was knighted by Queen Elizabeth II and was recognized as one of the 100 most influential people of the year by TIME magazine.
The annual award raises funds to support the Charter High School for Architecture + Design, the first school of its kind in the nation, founded in 1999 as a legacy project of the Philadelphia chapter of the American Institute of Architects. Previous recipients of the award include Jeanne Gang, Bjarke Ingels, Norman Foster and Steven Holl, Daniel Libeskind, Robert A.M. Stern, Rafael Viñoly and César Pelli.