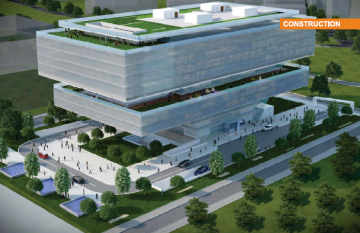 High-rise construction presents the construction industry with sizeable challenges and opportunities. It is a chance for crane, framework and concrete pump manufactures to ensure buildings are constructed in the safest and most impressive way.
The sheer size of these projects is only getting bigger – what should have been the tallest building in the world ten years ago. Now struggles to make the top ten. As the buildings get bigger, so the construction equipment used to construct, them must adopt and change.
Germany’s highest construction site is not a building, but a mode of transport. The 150EC-B6 Litronic Flat – Top crane from Libherr is being used to build the new Eibsee cable car. As an altitude of 2975m, the crane is at the highest building site in Germany.
In the US, the University of Pennsylvania is constructing a new 16 storey hospital on Penn Medicine’s West Philadelphia campus. The #1.5 million Hospital Pavilion will house 500 private patient rooms and 47 operating rooms. The construction of this hospital requires reliable tower cranes in order to lift the heavy loads quickly and safely. In this project, two of the strongest Wolff cranes in the Wolfkrann portfolio, the Wolf 1250B US and Wolf 700B US were used to provide the project with the highest niche of tower crane engineering.
The Fennel is set to be an iconic skyscraper in the heart of Kuala Lumpur, Malaysia. At 150m high, the structure consists of four blocks of 38 floors each, with a total of 459 apartments. The four blocks were built in pairs and have a distinctive architectural design in the form of a wave – like shape with sharp angles. Each pair of the towers is connected by a 50m long swimming pool. The development is surrounded parks and a variety of landscapes. The project started in the summer of 2013, with completion expected soon.
Ho Chi Minh City’s Landmark 81, the tallest building in Vietnam, has reached its full height of 461m. The project’s concrete framework was topped out six weeks ahead of schedule in March 2018, and now the final piece of the tower’s 60m spire has been lifted into place. Mace has been delivering project management services on the project for Vinhomes since 2015.
Major metropolitan downtown reconstruction projects offer challenges – it is virtual certainty that the site will be surrounded by structures on all sides, making it a tight fit for mobile cranes. Busy streets make it nearly impossible to block off a road.
It happened in Vancouver during the demolition and reconstruction of the 8th and 9th floors at the downtown Vancouver Public Library. The tasks included converting one provincial government office space into additional library space, meeting rooms and an urban green space, all while keeping the library open to thousands of visitors daily.
Construction company ITD (Italian Thai Development Public Company) is building two tall residential towers as pant of the iconsiam project in Bangkok, Thailand – Magnolias Waterfront Residences and the Residences at Mandarin Oriental.
In the financial district of Frankfurt, Germany, the 190m Omniturn Tower is currently rising skywards opposit the Commerzbank Tower, which is currently the highest building in Germany. At approximately half-hight, the tower has what could be described as “a shift of the hip” as the building’s axis shifts.

The GCC region’s governments are now aggressively pursuing economic diversification programmes due to fluctuating oil prices, and therefore, capitalising on other revenue generating sectors. The potential benefit of VAT to be implemented across the GCC on 1st January 2018 is that the revenues could be used by governments to improve services for citizens, with housing, healthcare and education given high priority.
The building construction market constitutes the largest market in the total GCC construction market. The market is robust due to growing local and expatriate population, and mega events such as Dubai Expo 2020, 2019 World Championships in Athletics, and FIFA World Cup 2022. According to experts, the housing development in KSA, Expo 2020 and FIFA World Cup 2022 will contribute to 5% growth in GCC building construction for the next five years. The GCC building construction projects expected to be completed across all sectors are forecast to increase by 6% from US$ 67,515 million in 2017 to 72,164 million in 2018.
The value of completed and awarded construction projects represents a definite potential for interiors and fit-outs as interior projects are usually contracted during the second half of project execution. A surge in construction activities influences growth in the GCC interiors and fit-out market, which constitutes approximately 10 to 22% of the average construction project value. Interior design and fit-out are closely tied to the overall health of the economy, and particularly the property market.
Despite fluctuating oil prices, many developers in the GCC region are looking forward to providing a facelift to their existing project structures to meet new demands and people. Owners of existing structures, either commercial or residential, are under pressure to optimise the value of their projects by refurbishing them. Some of the buildings in the country are old, and therefore, require renovation and refurbishment to maintain their market value. Planning, phasing and programming are essential factors while undertaking large-scale refurbishment projects. Flexibility, at the fit-out contractor’s end, is also significantly important, to be able to accommodate any last minute changes to the design or the project timeline, which happens mostly with large projects.
Opportunities for fit-out contractors are growing as owners launch projects to refurbish hotels in the run-up to mega events such as Expo 2020 and FIFA World Cup 2022. Hotels have been the leading sector for the last couple of years and the bulk of its work will be in refurbishing rather than fitting out new hotels.
The UAE continues to remain the GCC market leader in interiors and fit-out spend. With Dubai Expo 2020 approaching fast, the country’s infrastructure is undergoing a complete overhaul. Along with a slew of new real estate projects, refurbishment of existing structures has also gained prominence. Despite UAE’s strong growth, its dominance is now being challenged, with KSA’s interiors and fit-out sector growing.