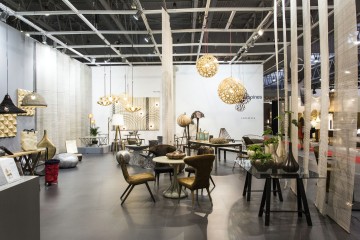 From now on, the three trends agencies that form part of the MAISON&OBJET Observatory will take turns at each show giving
their interpretation of the theme, which reflects the collective work carried out throughout the year, in an expanded space.

The new Inspirations Forum, which will present the Inspirations Space by Vincent Grégoire, will be extended through the Wild Café-Bookstore, designed by François Bernard and focusing on the theme of the Inspirations Book, illustrated by a selection of works. Lastly, the conference space will provide opportunities to explore the theme in greater depth and reposition it in the broader context of current trends.

Step into the game, a world full of signs, shapes, colours and tales, to reinitiate the creative mind. Our playfulness is fed by the aesthetics of board games, games of chance and games of balance. Chessboards, pawns, playing cards, dice, dominos, tarot, etc.

Anything is reason to have fun. The rules of this game ? To bring drama to décor, to bet on joyous and elegant maximalism, to play the card of Strange Beauty. In the luxury of this new decorative art, the colour red trumps all others. Sensuous materials and precious know-how are a winning bet. Games play with rules, times, styles and genres. Dada collages and the juxtaposition of heteroclite elements shuffle the cards of unexpectedness. The dice are cast. It’s your turn to play. For more info visit www.maison-objet.com
CERSAIE SOLD OUT 3 MONTHS BEFORE THE EVENT
“The entire 156,000 sqm. of cersaie’s exhibition area has already been sold out. this is made all the more remarkable by the fact – first and foremost – that it has occurred 3 months before the event is due to start. a concrete testimony to the worldwide interest in the international exhibition of ceramic tile and bathroom furnishings, held every year at the end of september at bologna, expressed by local and international exhibitors from all five continents”. the announcement was made by emilio mussini, president of the promotional activities and fairs commission for the 34th cersaie in 2016.

a second reason for satisfaction lies in the fact that it reconfirms the central role played by cersaie for the event’s two main sectors. the ceramics sector has 16 pavilions, while the multifarious bathroom furnishings sector occupies 4 pavilions, thus testifying to a truly representative event which will enable the visitor to view the most innovative proposals of manufacturers from both italy and abroad.

a more detailed reading of the data shows us that this year’s cersaie is characterised by participation and success. the continued popularity of natural wood parquet and marble is confirmed, for the third year running, by a completely sold out pavilion 22, which showcases these complementary materials for both walls and flooring, and which was a huge success in previous years.