How much lead have you inhaled from your wall paint ? 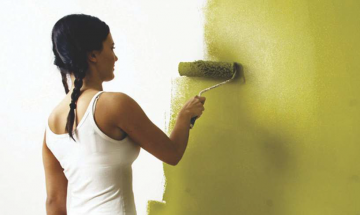 Studies indicate paints by smal and medium enterprises have lead levels way above prescribed limits
Ministry of Environment, Forest and Climate Change (MOEFCC), in its recent notification, has prohibited manufacture, trade, import as well as export of household and decorative paints containing lead or lead compounds in excess of 90 parts per million (ppm).

Activists, who have been highlighting the dangers of lead in paints used in households, have welcomed the new mandatory ‘Regulation of Lead Contents in Household and Decorative Paints Rules, 2016’ that was notified by the MOEFCC on November 1.

They also claimed that lead paints were a significant cause of lead exposure especially in children, and the new regulation will help in safeguarding the health of vulnerable children and mothers.

Satish Sinha, Associate Director, Toxics Link, which had identified lead in paints as a very critical issue of toxicity in 2006, and published research papers, shared that this was an extremely progressive standard, enabling manufacturers to make the shift from lead to no-lead paint possible.

“While our campaign resulted in larger paint companies removing lead from paints by 2014, a study conducted by Toxics Link in 2015 indicated that even today, paints manufactured by small and medium-sized enterprises had high lead levels, way above the prescribed limit of 90 ppm by the Bureau of Indian Standard (BIS),” said Sinha.
According to World Health Organisation (WHO), lead exposure is estimated to account for 6,74,000 deaths per year, with the highest burden in low and middle-income countries, and globally, lead in paint has been disallowed in Europe and the US for several decades, while it is still used in many developing countries.

Scientific evidences have also established that children and pregnant women are most vulnerable as low levels of lead in the bloodstream can also be harmful. Lead exposure has significant effects on the nervous system, the potential to cause brain damage and even death.

“For decades the paint industry has been ignoring the irreversible impacts of lead on the health of children. Finally, India joins the world in making it mandatory for paint companies, and products which use them, to comply with global practices of lead-free paints,” said Ravi Agarwal, Director, Toxics Link.

Now, decorative and household paints manufacturers have to label their paints, stating that the lead contents do not exceed 90 ppm, and the label should contain the name and address of the manufacturer or importer and date of import.

Meanwhile, every manufacturer or importer shall subject its product for testing of lead content every year before selling its product in the market?
Courtesy: www.dnaindia.com