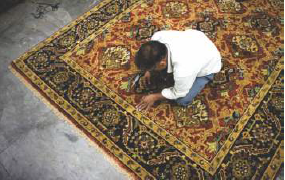 The Indian carpet industry during the post-independence era has witnessed an export-led growth. Besides, export prospects of carpets basically depend on overseas demand and domestic supply potential.

Despite being one of the largest producers and exporters of carpets across the globe, the unfortunate part is the demand for these handmade carpets and rugs have witnessed a downfall.

Further, the sector has made rapid strides during the post-independence era, especially during and after 70s in the wake of overseas demand which stimulated carpet production and exports.

In 2013-14, the total value of hand-made carpet exports was US$ 1,037 million. Indian handmade carpets are exported to over 100 nations and the US accounts for the largest share. For instance, around 40 per cent of the total carpet exports in 2011-12 were to the US.

Indian carpet has a special place particularly in the developed countries, which absorb 88-90% of Indian carpet exports. USA and Germany, the two largest and established markets for carpets together account for 76% of India’s exports.

The 29th Edition of India Carpet Expo was concluded successful on March 30 and has generated new hopes for Hand Knotted Carpet Industry.

On his concluding remarks Chairman, CEPC, Kuldeep R. Wattal informed that based on the success of this year’s Expo the 30th India Carpet Expo which is to be held in Varanasi in the month of October, 2015 shall also showcase both the segments of carpet weaving trainings provided, especially in the hamlets Bhadohi-Mirzapur and Varanasi carpet belt, under the aegis of Ministry of Textiles.

CEPC is also planning to have exhibitions for Domestic Consumers, as the domestic consumption of carpet is also on rise and Chairman; Carpet Export Promotion Council suggested a number of exhibitions to be held in the Metropolitan cities in the Financial Year 2015-16.