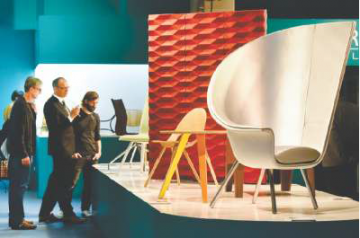 THAT WAS EXCELLENT!
More than 57,500 visitors from 143 countries
A 17 percent increase in visitors from abroad
1,561 exhibitors from 57 countries
8.6 percent increase in occupied exhibition space
Interzum in Cologne closed on 8 May 2015 with excellent results. More than 57,500 industry visitors from 143 countries (an increase of 8.5 percent) made for an outstanding atmosphere at the exhibitor stands over the four days of the fair. This is extremely rewarding in light of the Germany-wide train strike which was ongoing for the entire duration of the fair. At very short notice, Koelnmesse organised a shuttle service from Frankfurt and Düsseldorf airports as well as from the East Westphalia furniture region. The service was very well received and ensured convenient transport for visitors to Cologne. “The increase in visitors did not just reflect the appeal of the innovations and solutions showcased by our exhibitors but also emphasises the importance of interzum for the industry. There is no other event in the world which generates as much important momentum for this industry, in terms of both innovations presented and actual business conducted, as interzum does,” said Katharina C. Hamma, Chief Operating Officer of Koelnmesse, in summary. interzum thus seamlessly ties in with the outstanding results of ORGATEC, imm cologne and LivingKitchen and Koelnmesse underlines its position as the leading exhibition location worldwide for furniture and interior design.

With 41,000 visitors from abroad (an increase of 17 percent), interzum 2015 was once again a very international event. For one, there was a significant increase in visitors from Europe, from Italy in particular, as well in the traditionally strong showings from the UK, Spain, the Netherlands as well as from Poland. In addition, there was also a considerable increase in fair guests from Asia, particularly from China. Visitor figures from the USA (up 25 percent), South America (up 21 percent) and India (up 34 percent) also displayed an impressive upswing.

The atmosphere at interzum was one characterised by business and networking. The exhibiting companies unanimously reported excellent contact with representatives from all sales channels – at a very high level. This was confirmed by the preliminary visitor survey: almost 64 percent of visitors questioned revealed that they were either sole or joint decision-makers when it comes to purchasing and procurement decisions within their respective companies. Based on the excellent atmosphere at interzum, post-fair business is generally expected to be good.

With 1,561 companies from 57 countries in attendance, not only were all the market-leading companies represented in Cologne, but also plenty of smaller, highly innovative companies. No trade fair but interzum hosts so many market and trend leaders presenting their innovations in furniture production, interior fittings and materials used, making it THE industry meeting place for decision-makers.