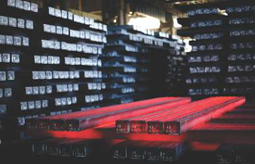 After plunging to a near five year low, iron ore imports in the country could see some traction in the current fiscal following a sharp correction in global prices and recent appreciation in rupee.

“Going ahead in 2014-15, this figure should go up to 0.5-0.8 million tonne in 2014-15. This is excluding pig iron or sponge iron” Prakash Duvvuri, head of research at OreTeam, a Delhi-based iron ore research firm said.

Iron ore prices are down 17.5% since the start of the year due to slowing Chinese economy and slackening demand for ore from its steel industry. Average CFR China ore price corrected to $114.82 in March from $134.19 in December. Huge ramp-up in ore production at Australia is likely to further reduce prices to double digit level in the current fiscal. Besides, rupee strengthening to 60 against dollar in recent times from 62 in the beginning of March may help push up ore imports.

“Imports should increase in the coming years but not sharply in 2014-15 because the expansion plans of the steel mills (which normally import) are still going slow and the running capacities of the same mills are less than 75%,” Duvvuri said.

“Definitely there is an advantage for the port-based mills to secure raw material from imports rather than domestic market as global prices have dropped to $115-118 levels and rupee has inched up to 60-61 against the dollar. There is a probability that rupee may even appreciate to 57-59 in the coming weeks,” Duvvuri added.

In the domestic market although mining has resumed in Karnataka, mines are not producing sufficient ore to meet the overall requirement of local steel producers. “Iron ore lump production has substantially decreased as compared to earlier, which could also be a reason for companies to look at imports,” HC Daga president of Federation of Indian Mineral Industries. He stressed that India has enough resources to meet requirement of domestic steelmakers but due to mining ban they had to face severe shortage.

Some of the ports such as Kandla, Mundra, Dharamtar, Paradip are used for importing ore. Lumps are mainly imported from Anglo (South Africa) and pellets from Vale (Oman/Brazil), Rio (Canada), Metinvest & Ferrexpo (Ukraine).

Welspun Maxsteel, now a part of Welspun Infrastructure (after the demerger with Welspun Corp) has been procuring iron ore pellets from Brazil and Oman. The company needs high quality pellets for its directed reduced iron (DRI) plant situated in Salav village at Raigad district of Maharashtra.

Prakash Tatia, president-marketing and raw material procurement at Welspun Maxsteel said that it was quite likely that ore import could go up, but he quickly added that as a buyer they do prefer to purchase ore from local market. He stressed that due to improved availability of pellets in Indian market, imports may not go up sharply.

Ashima Tyagi, senior consultant with Infraline Research said that improved availability of iron ore in local market might also be the factor that is stopping steelmakers from taking advantage of global price correction.

Mining ban is now likely to be lifted from Goa as well, which would improve the availability of ore, although Goa mainly produces low quality ore of 54%Fe. Improved availability of pellets due to imposition of 5% export duty on pellet may also deter steelmaker from imports.

However, there is significant quality difference between pellet quality of India and other countries, claimed Duvvuri. “In India, there are very few pellet producers who can produce over 63+% Fe pellets. The pellets available from VALE (Oman/Brazil) are of good grade 64-65% Fe. Ukraine & Canada supply nearly similar grades.”