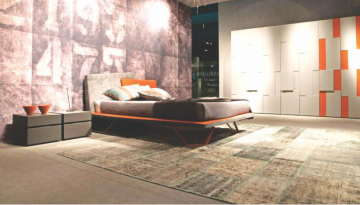 The new Kare Kraftwerk centre in Munich is not just a new branch of the popular chain of furniture stores. With the purchase of what used to be a cogeneration power station, the management of the company, whose head office has been based in Munich for more than thirty years, also found the ideal location for their new store.

The building, an historic example of 1960’s industrial architecture, is now an outlet for high quality furniture and furnishings. Since August 2014 the areas in the building, which have been completely renovated, have been offering four floors of original solutions in an almost eccentric style. When deciding on the renovation work to be carried out, the owners, designers and contractors all agreed on one point in particular, the original lines and forms of the building, typical of industrial architecture had to remain visible and adapt to suit their new use, but without losing their originality.

The curved openings in the roof, through which the chimneys used to spout, were converted into round windows, while components from the generators were used to create a sculpture adorning the main entrance. Other details, such as the fair-faced concrete surfaces, switches and buttons, were deliberately placed in various areas of the store to help preserve its “character”.

Standing eighty metres high, the building is easy to recognise it from a distance. It was originally used to generate electricity and provide heating and, in spite of the slump in the real estate business, in 2010 the owners decided to save the structure from being completely destroyed. The renovation and re-development work on the original structure took four years and was completed in August 2014.Today there are various themed areas spread over a floor space of 10,000sq.m.

A key player in the installation of the flooring was ULTRABOND ECO P909 2K, a two component, solvent free, polyurethane adhesive with very low emission level of volatile organic compounds, that is suitable for use on both absorbent and non-absorbent substrates. It has a very high bonding strength, excellent ridge holding and is easy to prepare, and within just 24 hours of application surfaces can be set to light foot traffic. After installing the wooden floor covering, which in certain areas such as the restaurant and display areas, is quite literally walked over. It was finished off with a treatment of ULTRACOAT OIL WAX, a water and oil/wax finish with very little odour used to protect wooden surfaces and give them a delicate, warm colour.

These products were particularly appreciated by the client and the flooring company for the durability they guarantee to a natural material such as wood, as well as for their sustainability. ULTRABOND ECO P909 2K adhesive in particular has very low emissions level of volatile organic compounds, which means it is safe to use in internal environments without any risk to the health of those who use the rooms.