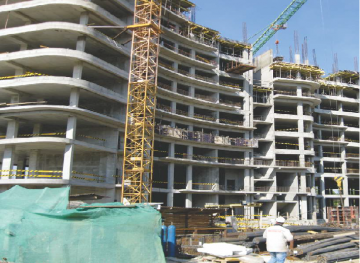 Construction market in Russia and the majority of the CIS nations remains largely in decline, their respective governments are green lighting major projects in an effort to stimulate growth. In Russia, we see a combination of a generally poor business environment, a weak ruble, economic sanctions by the west, the continuing low out prices, which do not show a healthy picture.
Research firm PMR has estimated that cement consumption in Russia totalled about 63 million tonnes in 2015, down from 71.5 million tonnes in 2014. At the same time, cement output contracted by 10%, to 61.8 million tonnes. There is unquestionably a good deal of doom and gloom in the industry, but there is also a sense that the market has reached rock bottom and the only way now is up.

The Russian government has certainly shown a willingness to move forward with renewable energy projects and has, over the past few years, introduced legislation to encourage growth in the sector. Unfortunately, due largely to the devaluation of the Russian ruble, a number of renewable energy projects have recently been shelved, and getting them back on track could take some time.

One project in the energy arena that cannot afford to be suspended is now heading for completion in Ukraine at Chernobyl. It was destroyed by the worst nuclear accident in history in 1986. With a life expectancy of 100 years, the installation of the NSC at Chernobyl will close a particularly horrific chapter in Ukraine’s history.

On a more upbeat note, formwork specialist Stalform is working with main contractor Gelar Group on the reconstruction of the Luzhniki football stadium in Moscow, in preparation for the Fifa World Cup 2018.

Another construction boost for Moscow comes in the shape of the new northern terminal of Sheremetyevo airport. Along with the new terminal will come a rail line and terminal, plus affiliated roads renovation and infrastructure installation.

While the general economic situation in Kazakhstan differs only very slightly from that of Russia, it has not prevented the birth of a new and extremely ambitious development project on the country’s southeastern border with China. As it stands, the Khorgos-East Gate Special Economic Zone (SEZ) is becoming a transit hub for international trade. In the future, it is expected to host an international distribution centre of goods for export to Russia, Central Asia, Turkey and the Gulf.

A movement of freight both within and through Kazakhstan will be helped further by the expansion of its highway between Almaty and Khorgos. Currently, the two-lane highway runs to 355 km, but the redevelopment will see the road both straightened and widened to four lanes.

In Turkmenistan, Turkish contractor Polimeks is one of the most active construction firms, either international or domestic. Having recently completed the development of the award winning US$ 2.25 billion international airport in the capital, Ashgabat, the company will soon complete construction work on the city’s US$ 5 billion Olympic complex.

Some 90 km from the southeast shore of Azerbaijan lies the country’s largest oil field, Shah Deniz. Discovered in 1999, the oil field has been delivering gas since 2006. Thanks largely to Shah Deniz – and the work of BP, which now owns a 28.8% interest in the oil field – the country has transitioned over the past decade to an oil-based economy. Unfortunately, 2016 was the first year since 1995 that the economy has contracted, due primarily to low oil prices.

Nevertheless, last year, a consortium including BOS Shelf, Saipem and Star Gulf secured a US$ 1.5 billion contract to undertake the Shah Deniz stage 2 project. Work on the project is expected to be complete by 2022 and also includes reactivation of the pipe-lay barge Israfi l Huseinov, as well as the second pipe-lay installation campaign of water flow-lines in 2019.