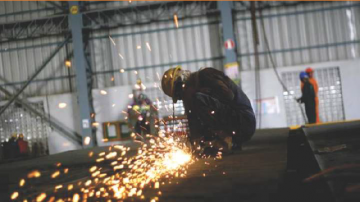 In a classroom of construction firm Larsen & Toubro’s training centre outside Mumbai, an instructor lifts up a tool and shows it to his students: “Clawhandle,” he tells them.

“Clawhandle,” chant back the young men, gathered under a picture of Vishwakarma, the Hindu god for craftsmen.

Prime Minister Narendra Modi is depending on such young people to realise his dream of turning India from a country of IT professionals, security guards and low-paid chauffeurs into a manufacturing and export powerhouse through his ‘Make in India’ initiative.

India has too few skilled labourers thanks to decades of neglect in training and it desperately needs electricians, bricklayers and plumbers.

The shortage means India could squander the potential demographic dividend of 12 million people joining the labour market a year, just when China’s workforce is expected to lose 6 million over the next decade because of its ageing population.

“India, so far, has been a country that celebrated knowledge and intellect. Skills are not celebrated,” said Rituparna Chakraborty, president of Indian Staffing Federation, which represents the country’s employment agencies.

By contrast, in India, students who do not go on to tertiary education have few vocational options other than government-run Industrial Training Institutes (ITIs) that executives say are poorly managed and often outdated.

For example, the ITI syllabus for car mechanics includes considerable training on carburettors, which were widely phased out of cars in the 1990s.

The scant training available means that India only has 3.5 million workers undergoing skills courses a year, compared with 90 million in China, according to Indian government data.

The lack of proper training is compounded by prejudice against manual labour under the Hindu caste system, which has traditionally left jobs that might get your hands dirty to the lowest of the low.

As a result, only one in 10 workers in India’s construction industry are skilled, according to government data.