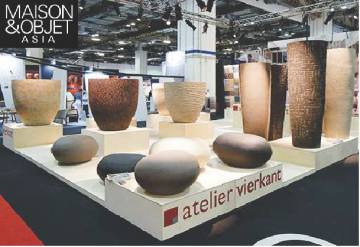 Maison & Objet Asia 2016 successfully repositions itself as Platform for the Interior Design Community in Asia-­Pacific Singapore, 18 March 2016-MAISON&OBJET ASIA (M&O ASIA) closes its third edition this year with a visitor profile that reflects its successful repositioning as a unique networking platform which is comprised of a curated exhibition, an interior design and lifestyle summit and an award showcase. 7200 unique visitoes passed through its doors over four days from 8 March to 11 March 2016. Of these visitors, 62% were key industry specifiers such as property developers, hoteliers, restaurateurs, interior designers, and architects. The percentage of interior designers visiting the show this year is a marked increase of 11% comparing to the 2015 edition.

This demonstrates the success that M&O ASIA has had in establishing its new position and in appealing to specifiers by providing them with amore curated and focused experience. M&O ASIA’s Designer of the Year André Fu was pleased with the targeted focus of this year’s salon: “M&O ASIA is a highly curated show that allows people from the design industry to explore all disciplines of designs under one roof.

Its focus on the world of hospitality also embraces the new generation of design community from this part of the world.” The M&O team took some of their guests on a tour in the fairground. Hotelier Andreas Stalder, senior vice president food & beverage operations/ product development, Hyatt International Asia Pacific, described the curated exhibition of M&O ASIA as “niche, unique and inspiring” while Maria Warner Wong, Design Director of WOW Architects/ Warner Wong Design, commented that “M&O ASIA brings the design world together with exquisite products, talented designers, industry leaders and innovative ideas from Asia and the West, in an inspiring and intimate environment.

“ Paul Hecker and Hamish Guthrie of Hecker & Guthrie from Melbourne were impressed by the scale of M&O ASIA and described it as “small enough to be intimate butlarge enough to showcase a lot of really interesting products”. “Both Hamish and have returned home after M&O ASIA with a renewed enthusiasm and the gratitude that we did not have to sit on a plane for 24 hours to have the experience of a truly international fair,” added Paul Hecker. For the exhibitors, both new and returning ones were especially delighted that the visitor profile was largely made up of specifiers who ere keen on leveraging M&O ASIA’s status as a networking platform for business. “M&O ASIA has been four days of excitement and commitment!

The opportunity to be in touch with a wide and various crowd, between interior designers, developers and hotel operators coming from many different countries such as Korea, Indonesia, Sri Lanka, Dubai, Thailand, and the Philippines was fulfilled by good traffic at our booth.

People are getting more and more attracted to new bespoke design concepts and we have been extremely gratified to showcase Lissé our new design collection, which was well received by the local and international visitors,” said Ricky Schulze, Executive Director, Dornbracht South East Asia who exhibited for the first time at the show.

Luzerne, one of Singapore’s top creators of bespoke fine china has been exhibiting at M&O ASIA since 2014. This year’s edition was especially beneficial for them:

“It is without a doubt we saw a more premium crowd this year quality versus quantity and the response towards our Luzerne Topsy Turvy World was definitely a show stopper which attracted many designers, buyers and specifiers to come into our stand to experience our Lazy Susan a playground for their imagination. This is exactly what we wanted to achieve when we conceptualised the showcase 6 months ago,” explained Elaine Lek, Head of Luzerne’s Global Brand Team. The popular Interior Design and Lifestyle Summit offered 20 conferences focusing on regional design projects and market trends. The closing remark by renowned interior designer Tony Chi attracted an enthusiastic professional crowd of around 350 people. “I feel this is a significant gathering for all of us involved in our beloved industry,” said Chi about M&O ASIA.

Winners of Rising Talents Awards from Australia, Japan, the Philippines, Singapore, Taiwan and Thailand were amazed by the number of media and business contacts they had made during the show. “M&O ASIA 2016 was really an extraordinary xperience, and, I expect, a milestone for our office. It was a pleasure to meet the other Rising Asian Talents, as well as many producers, designers, suppliers, potential clients, academics and journalists. We began conversations on a number of collaborative projects which are very exciting. For us M&O’s mission of fostering a design community is something that really comes to life during the show and we expect, long after,” said Josh Comaroff and Ker Shing Ong of Lekker Architects, the Singapore winners of the Rising Asian Talents Awards.

M&O ASIA’s Unique Position within the Singapore Design Week With its targeted approach to interior design, M&O ASIA has become a flagship event which draws significant regional visitors to the Singapore Design Week (SDW). “M&O ASIA’s position as a platform for interior designers has meant that the SDW has something to offer for everyone who is a part of the design community in the region.

The events that have run throughout the whole of the SDW have made Singapore the reference platform for high end interior decoration,” explained Philippe Brocart, Managing Director of M&O. With the conclusion of its third edition, M&O ASIA has shown its innovation and its commitment to serve the needs of the region. “Against the backdrop of this year’s uncertain economic forecast, M&O ASIA 2016 has been a great success in achieving what we had set out to do- to connect and to facilitate collaboration among top designers, makers and investors in Asia Pacific. Together with our shows in Paris and Miami Beach, M&O has created a global network which enables brands and designers to grow with us in a sustainable manner,” concluded Brocart.