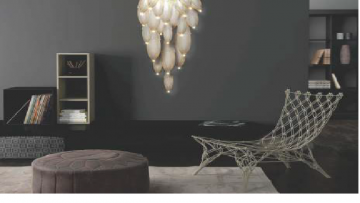 Meystyle showcases its latest in Euroluce at Salone Del Mobile, Milan 2017
Press Release – Mumbai, 25th April, 2017
Meystyle, the London brand luxury design brand, showcased innovative LED designer wall paper and fabric for the first time in Euroluce at Salone Del Mobile, Milan.
Bringing in a revolutionary idea for interior styling Meystyle shows a stunning range of illuminated LED wall papers and fabric conceptualized and created by designer sisters Maria and Ekaterina Yaschuk. Wallpaper by day and a source of ambient lighting at night while the lights can be switched on and off to quickly transform and add character to a space. At Euroluce platform Meystyle unveils the LED Wallpaper with the power to enhance or disguise architectural elements and create moods or focal points within a room. It has a rich and flexible medium for the user to play with and express their creativity.
The concept displays a decorative material where lights are a way of accenting a pattern with LED wallpaper further until it becomes an amazing light piece that could light up a room.
Meystyle’s latest collection Conductivity is a celebration of the ubiquitous yet mysterious power of electricity. The designs dig into the infinitesimal world of the atom and its scientific representation as a source of visual inspiration. The use of LEDs in this collection is inspired by the exchange of subatomic particles generating the prodigy of light itself.

Meystyle is a London–based design company specializing in designer LED wallpaper, an exclusive technology pioneered in 2004. Meystyle wallpapers are individually handmade which enables tailor made patterns to be created as per unique environments. The brand fuses technology with the tradition of hand-made crafts.

S.T. Unicom Pvt. Ltd. is a leading name in designer décor and furniture in India. Over the past 20 years, the company has redefined the organized luxury furniture and decor market in India. Over the last ten years it has partnered with many world acclaimed designer to bring the best of their collection to India exclusively. It currently brings almost 30 international design and décor brands to cater to the changing lifestyle requirements of contemporary Indians. The company and its brands cater to the nation’s architectural needs in the industry of Furniture, Decor & Accessories.