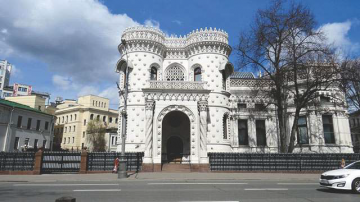 Moscow is a city with an amazing mix of architecture from different eras. Walking along the city’s old streets can provide surprising insight into the imagination of architects, merchant buildings from past centuries, traditional Moscow buildings that perfectly blend into structures from the Soviet era.

Behind each building is a history of Moscow and its residents, and sometimes mind blowing secrets. Each one is a fascinating journey into the past. 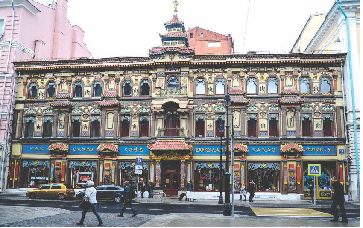 One of the most unusual houses in Moscow is located on Vozdvizhenka, 16. It’s an intricate mansion that once belonged to the noble Moscow merchant Arseny Morozov. The building is considered a federal architectural monument, but many people do not know that Muscovites did not start appreciating the site until the early 2000s. Prior to this, it had been unanimously dubbed as the “fool’s home.”
The house has a bit of everything; the portal of the main entrance with the towers on the sides in new Mauritanian style, twisted columns and a scattering of stucco molding in the form of cockleshells side by side with classical columns. Even more variety of styles await visitors inside the house. There is a ceremonial dining room in the form of a “knight’s hall,” baroque rooms, Arabic and Chinese influences. A small hanging garden was built as well.

The Tea House
The Tea House on Myasnitskaya 19 is a bright and alluring house. The Chinese style pagoda was built at the order of Sergey Perlov. He was a fourth-generation Perlov – a famous merchant dynasty. His business connection with China prompted the owner to redo the facade Chinese-style, which gave the building a unique look and served as excellent advertisement for the business. A variety of Chinese ornaments whimsically intertwined with mystical dragons completely changed the appearance of the house, which looked like a colorful curious box brought from distant wanderings. Particularly fascinating was the two-level pagoda tower, crowning the building in the center of the facade.
Margarita’s Gothic Mansion
The brainchild of famous Moscow architect Lev Kekushev is a unique ornament on Ostozhenka Street. The gothic mansion is considered to be Margarita’s mansion by fans of Mikhail Bulgakov, author of The Master and Margarita. The house looks like a medieval mansion with an asymmetrical composition and a tall tower. To create a complex composition, the architect used buildings of different sizes, decorating them with intricate stucco molding with a plant motif carefully crafted by the master. The combination of pink and white colors in the decoration of the house, the tent tower, and elegant window bindings give the building a special romantic.
Melnikov House
This single apartment house, a world famous monument of Soviet avant garde architecture, was built in 1927-1929 on Krivoarbatsky Lane 10 in accordance with the design development by the outstanding Soviet architect Konstantin Melnikov for himself and his family.
Melnikov’s house has no equivalents. It consists of two cylindrical buildings that penetrate each other and has no 90 degree angles either on the outside or the inside. Melnikov believed that the use of round forms leads to savings in building material. The house was built with the cheapest materials – brick and wood.
House with Tiles
When you exit Sukharevskaya metro station on the right, you immediately see this unusual house with emerald tiles. It is built in accordance with a design developed by Sergei Rodionov in 1908-1912. By the beginning of the 20th century, the modern style was already well known in Russia. The house is a great example of how new ideas blended with original Russian style of architecture. Vertical, clearly marked lines that make the house look sleek, visual division of the roof into separate elements – all this gives the house a lighter, modern look.
Igumnov House 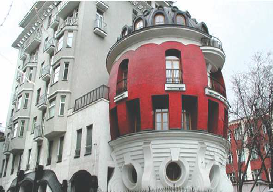 Igumnov House, located on Bolshaya Yakimanka 43, is an architectural masterpiece of federal importance. It is the most recognizable house in Moscow built in traditional Russian style.
The house was built in the form of a fabulous palace in pseudo-Russian style. Igumnov was ready to conquer the city and did not spare any funds to do so. Brick for construction was transported directly to the site from Holland, tiles were ordered at Kuznetsov’s porcelain factories, and interior decoration was entrusted to one of the most popular architects – Pett Boytsov. The most diverse and complex components were united in a single structure.
Egg House
The egg house on Mashkova Ulitsya 1 was built in 2002. Not a single other building in the capital stirs up as much heated discussions. Opinions about the egg house range from excited enthusiasm to complete rejection.

The architectural wonder contains several bedrooms, a hall, a sauna, and a spiral staircase and elevator that go upto the top floor. The house also has a personal entrance to the underground parking lot of the residential complex.