OFFICINA ALESSI ALESSI, All around the Clock 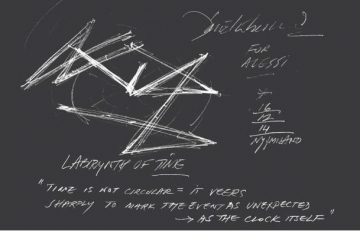 Alessi unveils a star-studded line-up for its new range of wall clocks
Alessi is focusing its attention on the concept of time through the interpretations of five high-profile designers: Abi Alice, Giulio Iacchetti, Daniel Libeskind, Studio Job and Mario Trimarchi. The universal notion of time has been creatively interpreted in the new collection by names from the world of contemporary design and advanced architecture. Daniel Libeskind, one of the most active and dynamic architects of this century, and Flemish artists/designers Studio Job have created their first projects for Alessi with “Time Maze” and “Comtoise” respectively.

The American architect sees time as a red labyrinth that “can suddenly swerve to mark an unexpected event”, while the Flemish duo wanted to give a historical perspective to things “with a clock inspired by the 17th century Comtoise pendulum clock”. The “Infinity Clock” by Australian designer Abi Alice represents the inexorable passing of time with regular and continuous curves that generate infinite movement, while the designer’s “Dotty Clock” was inspired by the age-old methods of measuring time and the geometric shapes of everyday objects: “I sought to create lively combinations also by exploring my interest in colour”.

Giulio Iacchetti has rewritten the classic definition of a wall clock by using the corners of rooms as original new locations. “Ora In” and “Ora Out” offer “a surprising formal solution for the clock, inventing the new category of ‘corner’ clocks'”.

Mario Trimarchi has created a new element for “La Stanza dello Scirocco”, a collection of objects that reflects the abstract and immobile atmosphere of a magical place: “the room where you take shelter from the sweltering heat in big old Sicilian country houses.” To mark the 2016 Salone del Mobile in Milan, the project will be presented at the Alessi Flagship Store on Via Manzoni with a series of displays personalised by each designer. As a sort of blank canvas, they will each suggest, in their own style, the context that best accentuates the character of their creation.