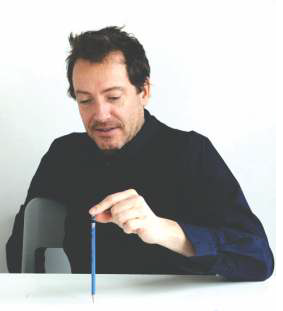 The French designer, artist and scenographer Pierre Charpin devotes himself to creating a poetic form of minimalism that is expressed in a secret garden of objects and furniture with an aura of grace. Find out all about the world of the Designer of the year MAISON&OBJET PARIS January 2017.

The designer graduated from Bourges art school in 1984 and he certainly does have an artist’s eye and sense for harmony. He also takes after his father, sculptor Marc Charpin, when patiently paring down material until the truth of a piece is finally revealed, whether one that has already come to life, is at the design stage or just in his mind’s eye.

Pierre Charpin hears the voices of objects in the making and maybe that’s why he began to focus on furniture and objects in 1990. After working in Milan in the studio of British designer George Sowden (one of the founders of the Memphis group) in 1993 and 1994, he returned to Paris, where he landed a ‘carte blanche’ at the VIA (Valorisation de l’innovation dans l’ameublement).