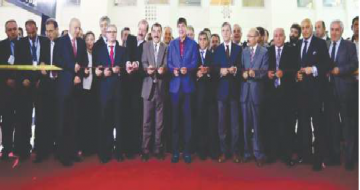 The Salone del Mobile in Milan has closed after welcoming 310,840 visitors through its doors. The visitor numbers confirm the trend seen in 2013, the last time the biennial exhibitions devoted to lighting and the office were held. On Saturday and Sunday, the two days the fair opened to the public, 30,881 visits were recorded.

With 69 percent of the high profile operators coming from other countries, along with strong purchasing power, to which all the exhibitors testified, the Salone has confirmed yet again its strong international following following, a statement said. The presence of Russian operators was reassuring. China proved the leading market and Germany was the second country of provenance for sectoral operators. This edition saw a particularly high number of visitors from the Middle East; Saudi Arabia, Lebanon and Egypt in particular. Visitor numbers from the US, UK and India were up. “The data confirms the importance and attractiveness of an event that showcases the very best of Italian and international furnishing”, said Salone del Mobile President, Roberto Snaidero Snaidero.

“The companies are delighted with the quality of attendees and the solid business results achieved over the six days of the fair, thanks to their own commitment and dedication to tackling and overcoming the tough financial situation of the last few years. The Salone therefore constitutes the first signal of the forecast recovery.”

Prime Minister Matteo Renzi referred to this recovery during his visit on the first day of the Salone. As well as recognising the leadership of the exhibiting companies, Mr Renzi emphatically underscored his government’s commitment to supporting the sector, both through specific domestic market development policies and through international promotional activities and support. Visits by several ministers and representatives of all the political parties were testament to the extraordinarily high quality of the sector and the importance of the event.

The theme of the 18th edition of SaloneSatellite SaloneSatellite, in which 700 emerging designers under 35 took part, was “Life Planet Planet”, proving extremely popular.

The Rho Milan Fairgrounds pavilions also contained Michele De Lucchi’s huge installation “The Walk Walk”, a circular path through the labyrinthine meanderings of the workplace, and architect Dario Curatolo’s installation “IN ITALY ITALY”, involving 64 Italian companies and a select group of designers, planners and architects; the installation becomes an app for exploring five interiors – in Lecce, Milan, Rome, Venice and the Val d’Orcia (the Sienese hillside) – in five different styles.

Attilio Stocchi’s installation/event “FAVILLA. To Every Light a Voice Voice”, in Milan’s Piazza San Fedele attracted more than 10,000 visitors. The Salone del Mobile was also one of the supporters of the Leonardo da Vinci 1452 1452-1519 exhibition, which opened on April 16th and is the greatest Leonardo exhibition ever held in Italy. Milan, 19th April 2015.