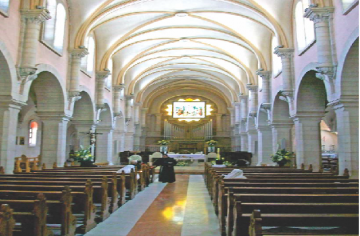 Restoration of the church of the Nativity in Bethlehem – one of the most popular sites for pilgrims visiting the Holy Land – started in september 2013 and is still in progress.
Along with Piacenti SpA from Prato (central Italy), the company which directed and carried out the consolidation work, mapei and its products and systems for strengthening and restoring wooden structures played an active part on the complicated and particularly significant site.

The prestigious basilica is one of the most antique christian churches and is steeped in spirituality. it was built around 330 AD by Emperor Constantine and his mother Elena on the ruins of an ancient Pagan temple, where the first christians celebrated the birth of Jesus. Rebuilt and extended in the 6th century by Emperor Justinian I, it was modified again during the Crusades era and then again over the following centuries, and is today a monument of considerable historical and artistic significance.
Over the course of the centuries a Franciscan convent, an orthodox monastery and an Armenian monastery were built around the structure. This is why there are now three different churches – Roman Catholic, Greek Orthodox and Armenian – jointly administering this place of worship which, since 2012, has been an UNESCO World Heritage Site.

The recent restoration work on this symbol of Christianity has never interrupted the wave of pilgrims visiting the Church, which is why this site stands out in particular for the complexity of the logistical operations to manage and carry out the work, made even more difficult by the range of skills required to carry out the work and the organisation and transfer of all the resources required for the work.
There is a condition of status quo of the Holy Land Sites inside the Church to accommodate the rights and jurisdiction of each of the three religious communities (Greek Orthodox, Catholic represented by the Order of Franciscan missionaries serving the Holy Land and Armenian Orthodox), with which the main contractor had to interface on a regular basis.

Thanks to a delicate and complicated work of co-ordination and dialogue, involving the Palestinian authorities, that it was possible to develop an articulated, organic study and a research, structural upgrading and restoration programme for the internal and external decorative and structural features of the Church over the last six years.
The uniqueness of this historical site, along with the significance of the project, meant that the study and specification phase of the construction details of the building, the materials used to build the church and their state of conservation, had to be particularly detailed and complex.

A document published in 2000 by UNESCO highlighted the precarious state of the roof and the subsequent damage it had caused, due to water seepage in the Church and on the plaster, the mosaics and the floor. A fully documented report from 2010 on the church was published by a multi-disciplined task force.

There are currently four teams working on the site, made up of highly specialised Italian Craftsmen coordinated by a technical team based in Bethlehem, which are also supported by a similar number of technicians. The site requires constant, ongoing control and coordination and maximum efficiency in order to keep in line with the work schedule, as well as to compile documentation on a daily basis to record all the areas covered, the products used and the way the actual work has been carried out.
Numerous problems have arisen over the years, both while setting up the site and when actually carrying out the numerous, complex types of intervention.