THE MUSEUM OF CAIRO 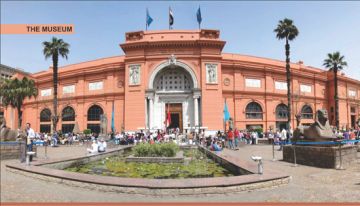 A city divided by the River Nile. An enduring enigma throughout history with its deserts, pyramids and death rituals based on a belief in reincarnation. Cairo has a population of 15 million including the surrounding areas, which makes it the most crowded city in the Arab world and the capital of the African Continent. The ancient Cairo Region has been included in the UNESCO world Heritage Site List since 1979.

The Egyptian pyramids are the oldest and largest mausoleums on earth and were built to bury the mummified pharaohs along with their treasure. The most spectacular of this pyramids is the Great Pyramid of Cheops, the first wonder of the world. It was built between 2753 and 2563 BC for the 4th Dynasty Egyptian Pharaohs.

The Great sphinx of Giza was built between 2620 and 2500 BC in order to protect the pyramids. The statue represents the Pharaoh, the God of Earth, in the shape of a lion. The body of the statue is a lion and the head is a Pharaoh.

The museum of Cairo is the most important place to see in Cairo. Originally founded in Giza in 1891, the museum was then moved to Cairo in 1902 and opened to the public. The museum of Cairo was built by French architect Marcel Dourgnon. Exhibiting pieces dating back to ancient Egypt, the museum is one of the most famous in the world. The most interesting sections in the museum are the mummy section and the gallery where the treasures of Tutankhamun and showcased. The mummy of Tutankhamun is kept in a private area in the Kings Valley in Luxor.

Ramses Square is genuine chaos housing the main station for trains, buses and mini-buses and always very crowded. Tahrir Square is also known as Square of Independence. The Square is in the centre of Cairo and houses the Arab Union Building, Mogamma and Cairo American University. There are many cafes and restaurants in this square.

Opened to worship in 972, EL Ezher Mosque was converted into a school in 989 which provided education in accordance with Shia theology. Today it is a university providing education to 30,000 students in Law, Medicine and Theology.

The El Hariri Arcade is very similar to the Grand Bazar in Istanbul. The wooden and stone shops sell giftware such as jewelry, Nargile, Spices, Copperware, Leather, Papyrus and Damask.

The ancient Mamluk cemetery, aka the City of Dead, which is located just outside the city, is a shanty settlement built on a cemetery. There are approximately 500,000 inhabitants living here. All poor and homeless come to this region to live in one room shades in this graveyard. This is a real grave city.

In Egypt, papyrus is very important. There are many papyrus workshops. Here there is a visual show of how papyrus is produced from the plant fibers grown along the Nile. Ancient Egyptian gods, pharaohs and life in Egypt are portrayed on papyrus with madder and silvering. Cheaper versions of these are also available from sheet renders, although they are not the same quality. According to seymours, papyrus is a major source of income here.