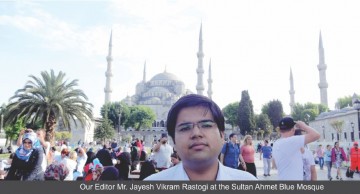 The Sultan Ahmet Blue Mosque in Turkey is named after Sultan Ahmet I, who ascended the throne at the age of 14. He was only 19 years old when he commissioned to build this great mosque to Sedefkar Mehmad Aga. He showed his dedication to the construction by personally working as a labour.

Sedefkar was the chief architect of the Ottoman Empire, an apprentice of the great architect Sinan, who is known as the best architect in Ottoman Era. The construction took about 7.5 years between 1609-1616. When the enormous amount of construction work, the interior design, decoration of the mosque and the dates of construction are taken into account, this is an extremely short amount of time.
When the Ottoman Turks built a mosque, they did not limit it only to a place of worship but rather a `kulliye` or ‘jami’, a large complex of buildings. Therefore, the Sultanahmet Mosque also included a hospital, a madrasah (a higher educational institution), an imaret (a soup kitchen), a primary school, a market (bazaar), and a tomb for the members of the royal family. There was also a room for an astronomer (called ‘Muvakkithane’ ‘time house’) where he made calculations of the times of prayer and other important occasions in the Muslim calendar.

The Sultan Ahmed Mosque has never been called by the Turks as “the Blue Mosque” throughout the history. However it was called like that by Western visitors because of its famous blue tiles from Iznik that adorn the interior walls of the mosque. These are more than 21.000 in number. In those handmade tiles along blue colour also white, green and other colours were used. The floral patterns represent Earth in spring time as well as Gardens of Paradise.
The greatest Arabic calligraphic examples on the interior walls of the Sultanahmet Mosque are produced by the famous calligrapher of the time, Qasim Ghubari. They are mostly Quranic verses and prayers as well as some attributes of Allah in Arabic language.

On the exterior part of the mosque, the most striking things are the minarets. They also mark the skyline of Istanbul. Inside the minarets there are stairs leading to the balconies and originally 16 people made the `adhan`, call to prayer, simultaneously towards different directions from the minarets. Today, with the use of current technology, one person stands at the bottom of the minaret and makes the same announcement which was made centuries ago.

The Ablution Facilities are on each side of the building. Muslims are required to be physically pure and clean at all times but especially before worship. Therefore they wash commonly used parts of their bodies including the hands, arms up to elbows, faces, and feet. Hair is simply rubbed with a wet hand. The ablution facilities for women are in a covered area for privacy. 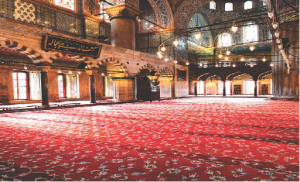 The Main Gate of the Mosque looks to the side of the ‘Hippodrome’ where the obelisks are. When you approach the main gate you see two Arabic notices to the approaching visitors. The first one is called Shahadat and the second is a quotation from the Quran.

The Mihrab (Niche) looks like a cavity in the marble wall and the structure reflects the voice of the imam to the people praying behind. The direction of the mihrab is the Kabah in Mecca which is the reference point for all Muslims around the world during ritual prayers. On top of the mihrab there are two verses from the Quran which mention the names of some holy people.