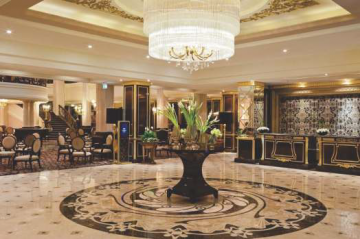 TOP 10 OF THE WILDEST HOTELS FROM AROUND THE WORLD
Form an underwater retreat to a leaning tower, take a look at some of the wildest and most design – driven hotels across the globe.
So whether you ‘re planning an escape for a few days or just want to take a virtual trip around the world, check out these 10 hotels that bring the best in art, design, and adventure under one roof.

1. Barcelo Raval Hotel, Barcelona, Spain
The sheer chance to chill in this lobby would be a vacation in and of itself. The flashy new barcelo Raval in Barcelona is girly and enticing. In the lobby, the hot magenta seating dominates against the dazzling sparkles of the interior column and stark black and white.

2. Kempinski, Beijing, China
Nestled in the Shuiguan Mountains and spread over eight square kilometers along the Great Wall of China, this collection of properties boasts some of the most creative and modern architecture in the area. Each of the 236 rooms and suites scattered across the commune offer views of the Great Wall. This one, the ” See and Seen House” by architect Cui Kai, is a bona fide glass masterpiece.

3. Ice Hotel, Jukkasjarvi, Swedn
What first opened in 1990 as an exhibit by a French ice artist has since become a magical and rather chilly chance for guests from around the world to experience the feeling of sleepjing in an igloo. Crafted from ice and snow, each year Ice Hotel is rebuilt by visiting artists and crators. Though the temperature never drops below 23 degrees Fahrenheit, guests don thermal underwear and hats and slip into a sleeping bag atop blocks of ice, a thick mattress, and reindeer skins. Here, a magical chandelier hangs in one of last year’s halls. Open December 10 to mid- April yearly.

4. boscolo Hotel Exedra, Nice, France
Though the recently opend hotel in France has been built in the Belle Epoque style, the hotel’s interiors are hardly antiquated. The bar, designed by Massimo losa Ghini, uses treelike sculptures and scattered lights across the walls and ceilings to create an organic yet futuristic feeling.

5. Burj Al Arab, Dubai, United Arab Emirates
Sitting on a man-made island located just off the shore, this modern and fanciful hotel has the effect of a sailboat drifting off to sea. At 321 meters high, this Tom Wright design stands as one of the world’s tallest hotel building and has become an icon of the Dubai skyline.

7. Poseidon Undersea Resort, Fiji
Nestled in the cerulean waters of a Fiji lagoon and accessible only by elevator are suites submerged a full 40 feet underwater. No oxygen required, it has all the luxuries of an aboveground getway but with an unparalleled view. A weeklong stay is split between the underwater suite and beach cabana accommodations so visitors can still fall asleep to the waves and the hotel can handle the high – demand for ocean immersion.

9. Les Cols Pavellons, Olot, Spain
With doors walls, ceilings, and even floors made completely of green glass and black steel, this surreal space is futuristic, eerie, and intriguing all at once. But though it may seem stark, the glass construction welcomes the influence of nature and adds organic style. Here, a glass floor allows a visitor to view the raw earth beneath.