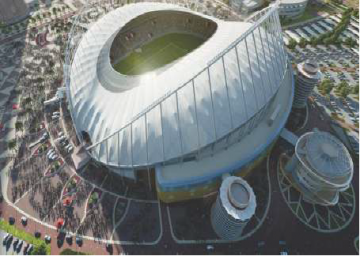 We look at Qatar’s 10 biggest spending commitments in preparation for the 2022 World Cup.

1. Al Rayyan Stadium: Built on the site of Al Rayyan Sports Club’s existing stadium, Ahmed Bin Ali Stadium, work is due to be completed in the first quarter of 2019. The stadium will have a capacity of 40,000 spectators in tournament mode which will be reduced to 21,000 post-tournament, with the upper tier of seats removed and sent to developing nations in need of sports infrastructure.

2. Doha Metro Project: Expected to be one of the world’s most advanced rail systems once phase 1 is complete by the end of 2019, the Doha Metro, Developed by Qatar rail, will have four lines with an approximate overall length of 300 km and 100 stations. It will be an integral component of the larger Qatar Rail network which is expected to be completed in 2026. Nearly a third of the track will be underground, half elevated and the remainder of the track at-grade level.

3. Al Wakrah stadium: The 40,000-seat stadium, and future home of Al Wakrah Sports Club, will be surrounded by approximately 560,000 sqm of legacy precinct with a new sports centre and community hub. The team working on the project includes Zaha Hadid Architects along with Aecom as design consultants and KEO International Consultants serving as project manager.

4. Lusail City: Lusail City extends across an area of 38 sqm and includes four islands and 19 multi-purpose residential, mixed use, entertainment and commercial districts. It is a comprehensive arena with leisure spots, residential buildings, commercial towers, avenues and public ports. Set to accommodate 200,000 residents as well as one of the seven world cup stadiums, the city has an estimated cost of $45 billion.

5. Khalifa International Stadium: The third proposed stadium for the World Cup, Khalifa International was originally built in 1976 and went through its first renovation and expansion in 2005. The latest renovation project will see the stadium’s seating capacity increased to 40,000 enabling it to host group stage, last 16 and quarter-final matches and include innovative cooling technology will be incorporated to ensure an optimal playing temperature of 26 degrees Celsius.

6. Doha Expressway System: The Doha Expressway system will consist of 280 km of dual four-lane roads. The 12 km Lusail Expressway will connect Doha to Lusail City. The country is also building a 7.5 km highway linking Doha and Dukhan. The expressway’s completion date is 2016 with an estimated cost of $8.1 billion.

7. Al Khor Stadium (Al Bayt Stadium): The project involves construction of a stadium with the capacity to accommodate 60,000 seats which will be reduced to 32,000 after the 2022 World Cup. The stadium will be situated at the heart of a 1 million sqm complex which will also include a hospital, a mall, and a park. The design of the stadium is modeled on Bayt Al Sha’ar, a black-and-white tent used traditionally by nomadic people in Qatar and the region. Expected completion date is 2018.

8. New Doha Port: A seaport with capacity of 2 million twenty-foot equivalent units (TEUs) will be built at Mesaieed, which will be expanded to allow additional capacity in the second and third phases of the project. Expected completion date is 2016 for the first phase while the second and third phases will be completed after 2022. The project will cost $7.4 billion.

9. Lusail Stadium: The stadium will be the centrepiece of a project by developer Qatari Diar to build a new city called Lusail on the western coast of the country, 15 kilometres north of Doha, at an estimated cost of $45 billion. Foster + Partners will work on the project with engineering firm Arup and sports architects Populous, who designed the main stadium for the London 2012 Olympics.

10. Msheireb Downtown Doha: Msheireb is a $5.5 billion project to redevelop, regenerate and conserve the historical downtown of Doha and will be the world’s first sustainable downtown regeneration project. It will feature premier office space, retail, leisure facilities, townhouses, upscale apartments, hotels, museums, civic services, and exciting cultural and entertainment venues. The entire project is slated for completion in 2016.