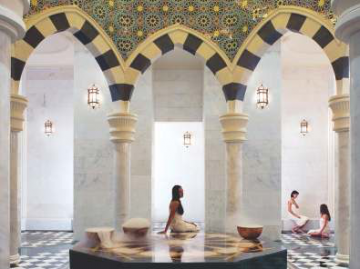 The sybaritic ancient Greeks and Romans were well ahead of us when they began indulging in regular trips to thermal baths more than 2000 years ago. Here, bathers induced sweat by moving through progressively hotter rooms before being massaged with oils and receiving a thorough skin scrubbing.

But it was the Roman Empire that started the bathing ritual, it was the Ottoman Empire that preferred it in the form of Hammam. Dashing out funds to create lavishly constructed and richly decorated hammams – some of which are still in use today in Istanbul – the public baths were open to the community from sunrise to sundown. Supplied with wooden clogs to prevent slipping and a soft cotton wrap, guests would first head to a warm room for relaxation, than a hot room to encourage perspiration, before entering a steam and massage room. Lying on marble slabs, a masseuse vigorously bather with a rough mitt and foaming soap to remove dead cells and reveals glowing, healthy skin. After a rinse, it was off to a cooling room – which doubled as an important centre for socialising. In the men’s room, news and gossip was exchanged alongside business meetings and philosophical debates; women gathered in their own room to nibble on sweets, listen to music or even keep an eye out for potential daughter-in-laws.

While its use as a hotspot for social gatherings died out after the fall of the Ottoman Empire, much of the hammam ritual – steamy rooms to melt stress and skin-renewing scrubbing atop smooth marble – has remained unchanged into the 21st century. And around North Africa and the Middle East, from Dubai to Muscat, opulent hammams with state-of-the-art amenities continue to welcome modern hedonists. Today’s version of the indulgent bathing treatment leaves no stone unturned, and includes massage oils infused with precious elements like gold and diamond, clay scrubs from far-flung locales and steam rooms scented with exotic aromas.

Talise Ottoman Spa
Embracing the centuries-old tradition of communal bathing, the heated marble Turkish hamman at Jumeirah Zabeel Saray’s award-winning spa is spacious enough for up to four spa-goers at once. The largest hammam in the Middle East, it is decorated with ornate columns, dark woods, mosaics and hand-painted ceilings, giving it a palatial feel.

Emirates Palace Spa
In the heart of this Arabian Sea-inspired hotel in Abu Dhabi you can find a traditional Moroccan hammam kitted out to appease any and all pampering desires. Two Jacuzzis, two steam rooms, heated marble and even an ice cave await guests at this exclusive haven of wellness. And, just like the over-the-top opulent surroundings in the hotel, the hammam treatments, taken from beneath a deep blue, domed ceiling mimicking a star-lit evening sky, are just as exceptional. The region’s love for natural fragrances is indulged in the Palace Rose hammam treatment.

Anantara Spa
Drenched in natural light from the Arabian Gulf’s clear, blue skies, a trip to this hammam is a double getaway with its location just offshore of Doha on private-island retreat Banana Island Doha by Anantara. Fitted with all of the usual trappings of an outstanding modern hammam – an indoor pool, ice well, sauna, Jacuzzi, steam rooms – the light-filled bath house stands out next to its peers’ dimly lit and moody spaces. An argan shell scrub is used to polish the body while laying back on a heated marble slab, followed by a rich ghassoul body wrap for nourishment.

Al Faisaliah Spa by Espa
The wellness retreat in Riyadh’s luxe Al Faisaliah Hotel is a ladies-only paradise replete with femme touches like Swarovski crystal-studded walls and richly upholstered furnishings. The highlight, however, is a high-gloss hammam that’s covered in pearlescent mosaic tiles, a ceiling that literally twinkles with stars and a central bathing area with its own waterfall. It’s not just the décor that is exceptional, with hammam treatments focused on softening and indulging. A rigorous body cleanse, foam massage and marine mud wrap are expertly applied in a peaceful private hammam room, leaving the skin fresh and glowing. Afterwards, any lingering tensions are dealt with through a scalp massage and fragrant aromatherapy body massage.

Saray Spa
At 4,300 sqm, this expansive spa is suitably sized for the cloud-scraping hotel it is based in – the JW Marriott Marquis Dubai. And inside the caravanserai-inspired Saray Spa, two spacious hammams – one for men and another for women – beckon travellers looking for a touch of revitalisation. Marble in sleek grey shades and tranquil blue mosaics set a more urban than traditional scene in the hushed, 21st century environment where a menu of hammam rituals are at your disposal. For those looking to take advantage of the earth’s natural wonders, the Dead Sea Hammam treatment makes use of hand-crafted olive oil soap and salt from Jordan’s Dead Sea to exfoliate, followed by a body mask of nutrient-rich Dead Sea mud.
One & Only Spa
If it’s an authentic hammam experience you are after – but with all the elegant trappings of a luxury resort – it’s difficult to go wrong with the Oriental Hammam at One&Only Royal Mirage. Inside a structure of gently lit domes, carved arches, prettily tiled walls and tinkling water features, it provides utter respite from the surrounding towering city, with a heated marble massage table, steam and private massage rooms, a jet shower, whirlpool and resting area. Therapies here are created to treat a variety of needs – and time constraints – from a 25-minute Traditional Oriental Back Massage to the lengthy Traditional Hammam Experience.