VOLVO CE AHEAD OF THE GAME 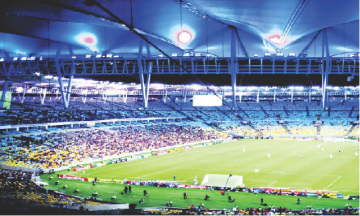 Brazil hosted the FIFA World cup football this year where its stadium Maracana or Estadio Jornalista Mário Filho was in limelight, hosting seven games in all, including the final this stadium was built in 1950 when Brazil hosted the world cup.

In preparation for the completion, a serious amount of work was done on modernizing the stadium and bringing it up to the FIFA regulations. Brazilian construction grant Odebrecht won the bidding rights to reforme the Maracana.

Odebrecht has worked with Volvo heavy machinery for the last seven years since for Volvo Construction Equipment opened its first factory in Brazil. About Volvo, the company says that it has competitive price, reliability, high productivity, good mechanical availability and low fuel consumption, ensuring that you produce for less, therefore increasing competitiveness.

Once the largest stadium in the world packing 200,000 people, the Maracana has much reduced capacity now but remains the company’s largest football venue. While respecting the original layout of the stadium, refurbishment included demolition of the lower ring of seats, construction of a new ring offering better visibility, more access ramps- allowing enacuation of the stadium in eight minutes and replacement of all seating. In particular, the Volvo machines were essential for the removal of debris and excavation of the seating.

The stadium was fitted with a new roof complete with a rain water collection system. The façade, which has been listed by the National Institute of Historical and Artistic Heritage, remains unchanged. When working on the Moracana, the greatest challenge was to maintain the iconic facade. As a result machines were required which were capable of performing demanding lifting duties on the equipment and supplies.

Having recently completed its most ambitions, exhaustive and far-reaching environmental challenge to date successfully overloading its entire portfolio of engines and machines to meet the Tier 4 emissions legislation in Europe and the US, Volvo CE is filing up pressure on the construction industry’s environmental agenda.

The plan is to stage a 2015 summit, provisionally planned for Gothenburg, Sweden. Which will bring interested organisations and bodies together. Including governments and academics, to focus on future shared projects and initiatives. Commissioned studies and research already discussed at specific events devoted to research and hosted by Volvo CE and a selection of invited partners, will also be presented at the proposed summit.

Such ideas could involve projects like Volvo CE’s own eco-operator scheme, where construction equipment drivers have achieved upto 20% fuel savings after attending specialist courses. The idea of challenge, generated within Volvo CE has created great interest in the Volvo group as a whole. Specific plans are still being formulated as to how the idea could be publicised ahead of a 2015 summit, such as instigating small pre-launches at industrial association meetings even at stopovers during the Volvo Ocean Race which weighs anchor in October.

The Volvo group has a long history of such proactive initiatives its first environmental policy was framed in 1972 when the company said, “we are part of the problem but we are also of the solution.”

Within a few years, Volvo has developed three way catalytic converter and the trend was set. In 2012 Volvo CE become the final construction equipment company to join the World Wildlife Fund Climate Savers Programme, signing up to the most ambitions carbon – reduction agenda ever undertaken within the industry.